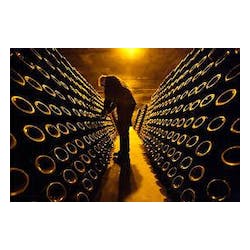 Simply put, it is a grand vin... with bubbles.Salon is a unique Champagne. All the emphasis in the production of this exceptional wine is on the singular. It was originally the product of one single man, Aimé Salon; from one single region, the Côte de Blancs; from one single cru, le Mesnil-sur-Oger; from one single grape variety, Chardonnay; and from one single vintage, with no blending whatsoever.Created in 1911 with first vintage 1905, Champagne Salon is the creation of one man, a champagne connoisseur enchanted then seduced by the terroir of Le Mesnil.At the beginning of the 20th century he just created the Blanc de Blancs. The first known vintage was 1905. Now that the tragedy of the war was over, he was encouraged by his numerous friends to profit more fully from his wine and the house of Salon was created, to cater for his new clientele.This Champagne is produced from a one-hectare parcel owned by Salon: "Salon's garden", and from 19 other smaller parcels in Mesnil-sur-Oger, chosen by Aimé Salon at the beginning of the century.The wines are cellared in the bottle for an average of 10 years, gaining in complexity and finesse.The proof that memory and history are important is shown by the bottles in the cellars from nearly all the vintages that have ever been produced at Salon.Headed by Aimé Salon until his death in 1943, the house was then left to his nephew. In 1988, Champagne Laurent-Perrier, a family-owned company, became the majority shareholder of Champagne Salon.Today, the house of Salon, along with its ancient neighbour and sister, Champagne Delamotte (the fifth oldest Champagne house, founded in 1760) are directed by one man, Didier Depond.

Wine Enthusiast 99 This legendary Champagne, only produced in exceptional years, comes from the village of Le Mesnil in the Cte des Blancs. It is made

Wine Enthusiast 100 "The 35th and most recent vintage of Salon since the house was founded in 1905 is memorable and magnificent. Made only from Chardonnay