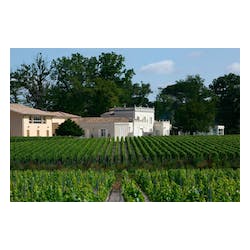 Established in the 17th century, its origins go back to the Middle Ages. It is reputed to be one of the oldest wine estates in the commune of Léognan. The elegant mansion was built in 1660. A historic property in Pessac-Léognan, it has been noted in the renowned Féret guide in 1874 for the quality of its wines and its terroir, situated on a superb gravelly hilltop in Léognan. The property was originally known as "Château Gazen et Bourbon", and then "Château Gazin" until 1995 when it took on its current name of Château Gazin Rocquencourt. A benevolent symbol, the Virgin looks over the vineyards and the village of Léognan, which she protected from bombing during the Second World War. The Bonnie family lives on the property and has been devotedly restoring it since 2006.

Vinous 94 Sexy and alluring. Succulent black cherry, chocolate, espresso, savory herbs, licorice and smoke are all amped up by the natural richness of the year.

Robert Parker 91 "Deep, rich, red and black currant fruit, plum, soy and Asian spice are present in this inky/purple wine, which is medium to full-bodied