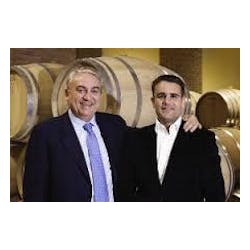 Located in Rioja Alavesa, Izadi aims to produce wines that express the character of the varieties indigenous to Rioja: Viura, Malvasía, Garnacha, Tempranillo, Graciano and Mazuelo. They own 72 hectares and have access to another 108 hectares through long term contracts. All are located in a triangle, hence this familiar shape on their labels, formed by the towns of Villabuena, Samaniego and Ábalos. Farming is sustainable with many organic practices. The average age of the vines is greater than fifty years old and the soils are a mix of sandy clays and clay limestone. Stylistically the adhere to a middle ground between tradition and modernism in Rioja valuing the elegance of the former married to the fruit-forward qualities of the later. The Anton Family founded Izadi in 1987 after years of running vineyards in Villabuena de Alaba. The Antons also own a one star Michelin Restaurant (Zaldiaran) in the hamlet of Vitoria. Transformation of the winery happened in 1997, when Don Gonzalo Anton hired Mariano Garcia (wine maker for 30 years at Vega Sicilia). Together with Angel Ortega (winemaker for Izadi), they created what we now recognize as the Izadi style: robust yet refined, modern and elegant.

Robert Parker 92 "A 100% Tempranillo aged 14 months in American and French oak, the 2011 Reserva is an outstanding value showing beautiful black and red