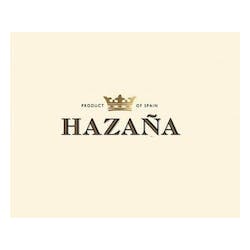 Hazaña is a recently introduced custom cuvee made in partnership between Eric Solomon and Rafael de Haan. British born and educated, Rafael joined the UK wine trade in 2000, realizing early on that he would rather have a career closer to the vine. In 2001 he moved to Barcelona, brokered some wine and opened a tapas bar before he opened his first property, Bodegas Abánico, in Rioja with his partner Nuria Altes. Named for the ancient poetic takes of heroism, Hazaña is made at Vinícola Real in the classical style of Rioja. The fruit comes from the vicinity of Logrono, where it grows at 500 meters above sea level on red clay and chalky limestone soils. A blend of Tempranillo with up to 15% Graciano, it is aged in French and American oak before released.

Jeb Dunnuck 91 "A blend of 85% Tempranillo and 15% Graciano, the 2017 Vinas Viejas gives up a clean, classic bouquet of blackberries, graphite, violets, and

Wine Advocate 92 “The 2014 Hazana Vinas Viejas is simply one of the greatest values in Rioja that money can buy. A blend of 85% Tempranillo

Robert Parker 92 "A spectacular wine assembled by Eric Solomon, Rafael De Haan and Miguel Angel Rodriguez, the 2012 Hazana Vinas Viejas is made from 45-

Wine Advocate 90 "Bodegas Abanicos 2010 RUA is a blend of three indigenous varieties, equal parts of Palomino, Dona Blanca, and Godello. It was fermented and

Wine Advocate 92 "The 2010 Tempestad Godello (100%) was fermented with native yeasts in stainless steel and aged sur lie for 3 months prior to bottling.