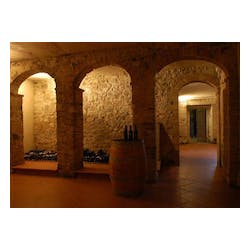 "Giancarlo Pacenti is the best winemaker in the appellation of Brunello di Montalcino. Everything is done in the best possible way and at the right time in his well-kept vineyards and the pristine small winery under his house. His Brunellos are usually a blend of different vineyards from both the south and north sides of the Montalcino hill, giving them great richness and structure as well as freshness. They are aged in French oak barrels yet show very little wood character, and their crystal clear style is one that ages extremely well. " "Giancarlo Pacenti is by far the leading exponent of the modern school of Brunello di Montalcino. No other producer has succeeded in crafting wines of this much textural beauty and refinement." – Antonio Galloni "Year after year, Siro Pacenti (run by the detailed-minded Giancarlo Pacenti) is one of the estates I most enjoy tasting during my annual trip to Montalcino. Talk about hitting the nail on the head."– Wine Advocate Giancarlo Pacenti is one of the most progressive winemakers of Brunello di Montalcino. His fame has been steadily growing over the last two decades. Pacenti, who took over his family's estate in 1988, ages his wines entirely in barrique, with the aim of making clean, rich and intense wines. His fruit is sourced from two family-owned vineyards in very different areas of Montalcino: one to the northeast of the town, Pelagrilli, where the wines show great fragrance, silkiness and relatively soft tannins, and one in the hotter southwest area near Sant'Angelo in Colle, known for full-bodied, powerful, and structured wines. His 'Pelagrilli' Brunello, though a single vineyard, is his entry level cuvee, and one of the best values in all of Montalcino. Coming from slightly younger vines than Giancarlo's Brunello "Classico," the 'Pelagrilli' is a more approachable wine. His 2010 Brunello Riserva "PS" was awarded 97 points by James Suckling. Pacenti's bold style and commitment to excellence puts his wines among the best of Italy. Farming Practice:Sustainable

Raffaele Vecchione 99 "Siro Pacenti Brunello di Montalcino Vecchie Vigne 2016 was the most powerful of the wines on the podium. Taut and muscular, it reveals

Ruby red in color with a nose full of Marasca cherry and pencil lead. Clean and linear on the palate with plenty of fruit and

Vinous 92 Leave it to Giancarlo Pacenti to make one of the most polished Rossos of 2017. Sleek and racy, with tons of persistence, the 2017

Wine Advocate 91+ "The 2016 Rosso di Montalcino is a bright and vibrant red wine that really pops from the glass. It exhibits a cheerful vertical

James Suckling 100 This is very intense on the nose with blue fruit, cool stones, brambleberries and blackberries. Wet earth, too. Full-bodied and extremely dense

James Suckling 96 Such lovely aromas of flowers and red fruit with some cedar and spice. Hot terra cotta. Full-bodied, very round and soft textured

James Suckling 93 "A solid red with dried cherry, strawberry and lemon aromas and flavors. Full and rich. This is the best Rosso di Montalcino out

James Suckling 96 pts Such lovely aromas of flowers and red fruit with some cedar and spice. Hot terra cotta. Full-bodied, very round and soft textured

James Suckling 97 "A very muscular red with plum, blueberry, walnut and dried mushroom character on both the nose and palate. Full and chewy. Fabulous fruit

Wine Advocate 97 "Only made in the best years, the 2010 Brunello di Montalcino Riserva PS is a phenomenal achievement. The wine was produced in 2006,

Wine Advocate 89 "The 2009 Rosso di Montalcino shows off tons of finesse and elegance in its plump fruit and juicy personality. The flavors build beautifully

James Suckling 92 " Clear aromas of plums, cherries and flowers follow through to a full body, with velvety tannins, fresh acidity and a clean bright

James Suckling 97 "Aromas of blackberries and blueberries follow through to a full body and velvety tannins. This is so layered and deep. Fabulous texture -

"These are quintessential Sangioveses that are wonderfully aromatic, opulently rich and powerfully structured. Giancarlo is considered to be one of the top Brunello pruducers.

Robert Parker 96 "The 2006 Brunello di Montalcino PS captures all of the promise I sensed when I first tasted it last year. Freshly cut flowers,

Robert Parker 97 "The 2004 Brunello di Montalcino is a huge, dense wine that explodes from the glass with tar, smoke, earthiness black cherries and minerals.