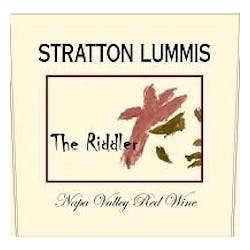 There were never two men so different. Dewey Stratton was a humble man. Born into a share cropper's family, all he ever wanted was his own farm. Lummis was one of the most famous and colorful personalities of his day. He was an author, editor, archaeologist, knight, crusader, adviser to the President, mentor to many artists and consumer of much wine. We made this wine with our great-grandfathers in mind. Wines from famous vineyards, priced humbly.Our Winemaker Richard de los Reyes tells it this way. "I was attending a school in Colorado where you took one class at a time. I watched the Chemistry majors killing themselves, trying to cram a semester of work into three and one half weeks. I was one class away from Christmas and I was hoping to have fun. I decided to take an art class. I had too much fun. My best friend and I flunked the class. My angry mother flew me back to California and informed me that she had sacrificed a lot to support me in college. She was done. If I wanted to go to college I could pay for it myself. She did have an idea for me. I met with the winemaker/owner of Korbel who convinced me a career in winemaking would be great. When we released our first Cabernet Sauvignon we named it after our great grandfathers and I put the paintings I flunked with on the labels to tease my mother." Furthur, two of California's finest painters, Terry St John and Diane Stevens contributed paintings for our labels as well. The painting on our latest wine - our "Napa Red" - is another of Richard's earlier works called "The Riddler".

"Our Red Blend is a riddle of grapes for you to solve. 100 from Napa's best sub-appellations, it is based on a painting by Winemaker