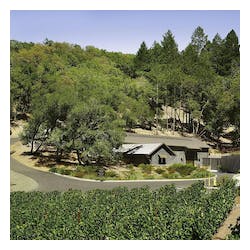 Located along the foothills of the esteemed Howell Mountain in the Napa Valley, Dancing Hares is a producer known for its two Cabernet Sauvignon-dominant blends from its five acre vineyard site. Dancing Hares was founded in 1997 by Bob Cook and Paula Brooks with the help of Michel Rolland as a consultant winemaker, and in 2016 Tuck and Boo Beckstoffer acquired the establishment and added it to their vast collection of Napa Valley Estates. Divided into two separate plots, the upper portion of the vineyard is recognized for its volcanic soils planted tot Cabernet Sauvignon and Petit Verdot while the lower vineyard parcels have clay-loam soils made for Merlot and Cabernet Franc. They typically only produce less than 800 cases of their Bordeaux blend annually, and much of their wine is carried at local restaurants with small distribution outside of Northern California.

James Suckling 92 “Plenty of ripe blueberry and plum aromas here with a swathe of violet-like florals, too. The palate is succulent and fleshy with a

" The first vintage of Mad Hatter was made from the 2003 harvest, with the commitment of making an elegant and well-balanced Bordeaux blend from

Wine Advocate 98+ "Their flagship wine, the 2013 Proprietary Red Dancing Hares is a blend of 60% Cabernet Sauvignon, 34% Merlot and the rest Cabernet Franc