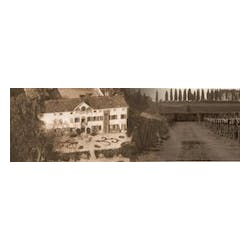 The Squarano estate is located in the heart of the most classical Valpolicella, on a gentle hilltop surrounded by vineyards, cherry and cypress trees. Here the Marchesi Fumanelli family have been cultivating grapes and producing prestigious wines since 1470. Built in the seventeenth century by the noble Fumanelli family one can still admire the inscriptions and archaeological remains to be seen on the grounds of the villa, including the vestiges of a temple dedicated to the Goddess Flora, built by the Romans who planted the first vines over a thousand years ago.From here, presumably, derives the name San Floriano given to the millenary church and to the village. It is likely that also the villa of King Berengario dating back to the X Century was positioned on the hilltop of Squarano. Since 1998 the ancient cellars, after careful restoration, host once again the oak barrels for the ageing of the classical Valpolicella wines. Their fragrances evoke the local hills of cypresses and cherries. They have the colours of memory, traditions and culture of the territory.

The Marchesi Fumanelli family has cultivated grapes and produced wines from their estate for 28 generations dating back to 1470. They deftly combine traditional and

"Intense ruby red with violet reflexes, pronounced and characteristic bouquet of mature red fruits with a slightly spicy note. A wine of great structure and