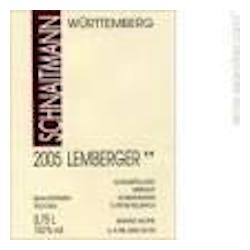 "Rainer Schnaitmann was chosen newcomer of the year in 2007 by Gault-Millau/German Wine Guide just 10 years after he founded the estate. We discovered the estate when it won the European Pinot Cup two years running; no one since has duplicated this achievement. Within this short time in the wine profession Rainer has already had significant influence to bring focus back to the long neglected Württemberg wine growing region, especially with his attention to Pinot Noir and other more interesting varietals while moving away from Trollinger for which Württemberg was always known for. At a Pinot Noir tasting a few years back at the Adlon Hotel in Berlin wines from Burgundy, New Zealand and Oregon were tasted blind. Wine #19 impressed everyone on the panel. When the covers come off it was a 2004 Simonroth "R" from Schnaitmann.His tasting room in Fellbach, according to Stuart Pigott, is the center of a cult where wine lovers surround Rainer like electrons surround the nucleus of the atom. What he has accomplished in barely 15 years, taking 2 ½ hectares from the local Fellbach co-op to the top of the Württemberg wine region with now 25 ha, is an amazing accomplishment in German Wine. His most important holding is the Grand Cru Fellbacher Lämmler with gypsum keuper, colored marl and sedimented red sandstone depending on elevation in the vineyard; the other Grand Cru, the Uhlbacher Götzenberg, Schnaitmann's holdings are in the heart piece which is a reed sandstone quarry – easy to warm up, poor water maintenance – lighter soil produces looser knit but refined Rieslings.Schnaitmann produces 11,000 cases annually and is a member of the VDP."

In the glass this Lemberger is an elegant deep violet red. The nose is nice and open revealing ripe cherries, blackberries, licorice and vanilla. The

" In the glass this Lemberger is an elegant deep violet red. The nose is nice and open revealing ripe cherries, blackberries, licorice and vanilla.