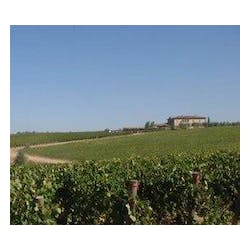 Donna Laura red wines are produced from first-class Sangiovese grapes grown in the Castelnuovo Berardenga region of Chianti Classico. This new venture, spearheaded by owner Lia Tolaini-Banville, was initiated to fulfill a need in the American market for consistent high quality Sangiovese wines at an accessible price point that are representative of the terroir of the region. To combine the best of tradition and modern characteristics, Donna Laura wines are a blend of two Sangiovese clones, CH-20 brings structure, while F9, a more modern clone, augments the fruit intensity. A portion of the grapes come from the highly esteemed Tolaini vineyards and Lia also makes the Donna Laura wines in her father's state-of-the-art winery. As a result, the quality of care of the expert winemakers at Tolaini as well as the innovative equipment and techniques in the winery produce outstanding wine at an affordable price point. This balance of old and new character initiated in the vineyard, in cooperation with modern winemaking techniques, makes these three wines, Bramosia, Alteo and Ali, delicious to drink on their own, or equally pleasing with a variety of different foods. No wine better accompanies Italian meats, cheeses, pastas and pizzas than a Sangiovese - it's a natural pairing that is as historic as wine itself. The Story of Donna LauraWhen she was just 6 years old, Lia visited Lucca, Tuscany with her father and met her Aunt Laura for the first time. A mother to three energetic boys, Aunt Laura was instantly drawn to the gentler Lia and they quickly formed a strong bond. Then from the time she was just 11 years old, Lia spent every summer with Aunt Laura and her cousins, immersing herself in the culture of their family. This special experience became such an important part of Lia's life that after graduating from university, she returned to live in Florence to study art and spend as much time as possible with Aunt Laura and her family in nearby Lucca. Even after she married her sweetheart in Canada and returned to live there, Lia continued to visit Aunt Laura with her own children so that they would also have an opportunity to get to know this very special and incredibly wise woman who was so dear to her. Aunt Laura died suddenly of a heart attack in March of 1996. In 2004, Lia started her own label; it was natural that she would name the winery in honor of this woman who had had such an amazing influence on her life, on her love and appreciation of Italy and who Lia had, in short, become. Her appreciation of Italian culture, art and food were thanks to her aunt, Donna Laura. The label of the first wine, Bramosia Chianti Classico DOCG, was inspired by one of Laura's favorite pieces of art, a painting of Bacchus, Cupid and Venus by Dutch artist Hendrick Goltzius. Also in honor of her family, Lia named the Ali Sangiovese IGT for her daughter Alicia and the Alteo Chianti DOCG after her sons Alessandro and Matteo. Cupid on the Ali label is taken from the Bramosia painting and is a fitting image to represent Ali; in Italian "ali" means wings. Bacchus, the mischievous boy of mythology, is the perfect symbol for Lia's two boys.

Vinous 90 "The 2020 Ali Toscana Rosato is pretty and perfumed, showing honeyed florals, sweet peaches and nectarines. This is soft and enveloping, yet offers a

James Suckling 90 A very pretty Chianti with aromas and flavors of black cherries and hints of burnt orange . Its medium-bodied with medium tannins and