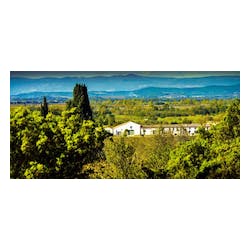 "La Cendrillon" is the name of a hamlet in the Ornaisons village, near Narbonne, in the Occitan region. The name was established over the course of time. It refers to an old inn that sat, at the dawn of time, on the side of a Roman road, known as l'Aquitania. This road linked Narbonne to Toulouse and crossed the river Orbieu, with its unpredictable current, right next to the Estate. During the 5th century, Sidoine Apollinaire, the son in law of the Roman Emperor, Avitus, made several trips to the area surrounding "La Cendrillon". In a letter, dated 479AD, he writes of the beauty, the layout of the thermal baths, the columns, the olive groves and particularly of the quality of the vineyards. Throughout the centuries, the château of Ornaisons and "La Cendrillon" witnessed the magnitude and the decadence of the Roman Empire; the magnificence of the King of the Wisigoths, Théodoric the Great; the Saracen raids of the 7th and 8th centuries; the epic stampedes of Count Carolingien, Guilhem of Gellone; and the fall and demise of Bernard Trencavel, the Viscount of Béziers, who was killed in the Cathar upheaval and crushed by the Albi crusades. It was only during the 13th century that Ornaisons, its Château and the village became part of the Kingdom of France. Like all old Roman cities, until the revolution, the municipality of Ornaisons was administered by two elected consuls. One of them, Jean-Pierre Ajac, was an ancestor of Robert Joyeux. Revealing the potential of an estate with the latest technology means nothing without the quality and determination of our staff. We have invested in a highly professional team, who shares the same ambition to bring the estate to the highest level of excellence. We have called upon recognized professionals within the industry. In 2011, Eloi Dürrbach, proprietor of the Domaine de Trévallon, reputed internationally, brought us his advice for the choice of grape types, the management of the vineyard and the wine making process itself. A true dynamic of progress and team works towards excellence is set up in the vineyard and the cellar. Wine making control The grape picking takes place by hand, plot by plot, to enable each plot to express its originality. The harvest is carried out at optimal maturity with low yield. The grapes are rigorously selected and sorted as only to keep the best. The "bourguignonnes" oak barrels, demi-muids and small tuns are filled with the wines that will be produced throughout our tastings during 12 to 24 months. A dynamic development programme has begun and is already bringing results, the "La Cendrillon" estate's reputation and profile is growing in Europe and in North America.