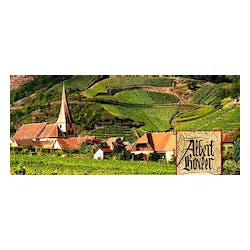 The small family domaine in France that works traditionally using techniques and savoir faire passed down across multiple generations is under serious threat today. Consolidation, technology, regulation, foreign investment, globalization, and many other factors (all in the name of progress), threaten the great agricultural tradition of winegrowing in France, arguably the world's greatest winegrowing culture. Few domaines in France embody this way of life more ably and proudly than Domaine Albert Boxler in Niedermorschwihr. Jean Boxler, many generations removed from his ancestor of the same name that moved here from Switzerland in 1673, currently rules the roost at this humble yet incredibly exciting domaine. Intense and serious about his land, his craft, and his wine, Jean is the genius behind what are certainly some of the finest white wines in Alsace (and the world). World War II brought Jean's grandfather Albert back to Niedermorschwihr from Montana, where he was busy enjoying the natural gifts of big sky country. After the war Albert returned to the family domaine in time to harvest the 1946 crop. He became the first generation to bottle the family's production himself and commercialize it under a family label. The wine still wears a label drawn by his cousin in 1946. Albert's son Jean-Marc continued the tradition for several decades until passing the baton to his son Jean in 1996. The family's holdings are centered around the ancient village of Niedermorschwihr in the Haut-Rhin, dominated by the imposing granite hillside grand cru, Sommerberg. Jean vinifies micro-parcels within this cru separately, de-classifying some into his Réserve wines and producing multiple bottlings of Sommerberg from the different lieux-dits depending on the vintage. Sommerberg gives racy, intensely structured, very long-lived wines. Riesling, Pinot Gris, and Pinot Blanc are the specialties of the domaine, Jean also produces one of Alsace's best Crémants (and Edelzwickers), an incredible Gewurztraminer grown in limestone, and some of the most hauntingly pure Vendanges Tardives and SGNs in all of Alsace. If that weren't enough, the Boxlers also own land in the powerful grand cru Brand, the ultimate counterpart to their holdings in Sommerberg. The Sommerberg hillside terminates in Jean's driveway, making it easy to basically live in the vineyards, ensuring exceptionally healthy fruit year after year. After harvest, the wines are vinified and aged in old foudres in a small cellar underneath the family home until bottling. Not much has changed over the centuries; not much has needed to. Tasting through the entire range of Boxler's wines is ample proof of the fact that Alsace, along with Burgundy, is the source of the world's most complex, exciting white wines, and will probably always be.

2014: 60% Pinot Blanc, 30% Riesling, 10% Muscat Depending on which varieties are used in the blend, the producer can label the wine as AOC Alsace,

Fresh aromas of white flowers, lemon-lime blossoms and lychee. It has mouthwatering acidity, light to medium bodied with wonderful floral notes in the palate. "Boxlers Edelzwicker