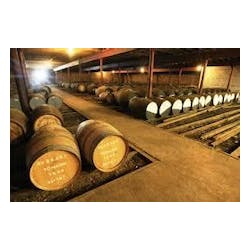 Tomatin distillery is a single malt Scotch whisky distillery in the village of Tomatin. Its whisky is classified as being from the Highland region, as it is 25 minutes south of Inverness.Although it is thought that whisky has been distilled on the site since the 16th century, when cattle drivers would buy from a local still,[1] the distillery was not established until 1897, under the name of Tomatin Spey Distillery Co Ltd.[2] The company went bankrupt in 1906, and reopened under new ownership in 1909. After the liquidation of its owners in 1986, it was taken over by Japanese conglomerate Takara Shuzo and was renamed Tomatin Distillery Co Ltd.The distillery operated with only two stills until 1958. Starting at that time, they began to add stills to increase production capacity, eventually reaching production of 12.5 million litres of whisky per year during the 1970s. Although in 1987 Tom

" The nose is quite punchy and of good body. There are notes of chewy grape and sultana with winter spice; cloves and cinnamon. There

Tomatin 12 Year Old Single Malt Scotch Whisky is made from plump, Scottish barley. After the barley is harvested, it is mashed and fermented before