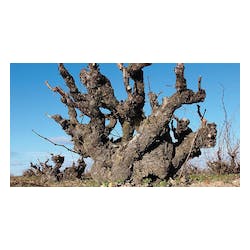 Long ago, the town of Toro was famous for producing the finest red wine in Spain and was mentioned in the historic literature of Alfonso IX (King of León, 12th c.), Juan Ruiz the Archpriest of Hita, Quevedo, Luis de Góngora, and Miguel de Cervantes. In 14th Century Sevilla, the sale of any foreign wine was prohibited, save the wines of Toro. These wines also accompanied Spanish explorers to the New World. The legendary Duero River plays a very important role in the history of D.O. Toro. The Duero deposited Toro's characteristic sandy soils in this region thousands of years ago. These sandy soils allowed D.O. Toro to completely resist the phylloxera plague, and as a result, Toro was the only Spanish region that completely resisted the phylloxera, and is home to the highest concentration of ungrafted vines in Spain. Jorge Ordóñez is Toro's most important modern pioneer. When Jorge first travelled to Toro in 1991 he discovered no more than five cooperative wineries. He also found acres of incredible pre-phylloxera vineyards, planted on their original rootstock. In 1995, Jorge first travelled to Toro with the Eguren family of Rioja, in hopes of founding a winery with them. In 1997, Bodegas Numanthia was founded by Jorge and the Eguren family, and become an icon for this historic region and the production of world class wines from authentic vineyards. By the time Jorge and his associates sold Numanthia to LVMH in 2007, there were 85 other wineries in D.O. Toro attempting to emulate the success of Numanthia. After the sale of Numanthia, Jorge founded Bodegas Ordóñez, his personal project in D.O. Toro. One of the wines produced by Bodegas Ordóñez, Triton, is considered by many to be Toro's finest value. As Ordóñez himself says, it is an honor and privilege to produce wines from the oldest clones of Tempranillo, planted and cared for with the most traditional methods of viticulture. At Bodegas Ordóñez, Jorge pioneers and champions D.O. Toro as one of the world's finest red wine regions. Toro is a special region for Jorge and the rest of Jorge Ordóñez Selections, because it is the perhaps the region that best embodies the Ordóñez philosophy – producing wine from the oldest clones of Spain's indigenous varieties. The local indigenous grape, Tinta de Toro, is Spain's oldest and most original clone of Tempranillo. It produces the deepest, most intense expression of Tempranillo in Spain, and it is a grape with a noble history that should be heralded. Bodegas Ordóñez produces wine from ungrafted, head trained, and dry farmed vineyards of Tinta de Toro planted in 1900, 1916, 1946, and 1962.

James Suckling 92 "Plenty of bright and attractive fruit on the nose with summer berry compote and complementary meaty and spicy oak. The palate has attractive

"Triton is made with the Tinta de Toro grape, one of Spain’s oldest Tempranillo clones that is native to Toro. The grapes for this wine come

Robert Parker 90 "From Spain's most historic region for Tempranillo, having been first planted in the 14th century, the 2012 Triton Tinta de Toro is 100%

Wine Advocate 91 "More impressive is the 2011 Triton Tinta de Toro, which comes from the appellation of Toro. This cuvee is fermented in stainless