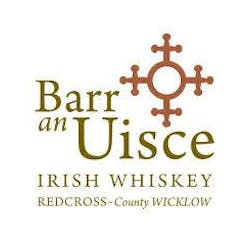 From the place where the grass is 'a green' like no other green in the world. A place entombed in ice for thousands of years and then sculpted by giant glaciers. Today, if you are lucky enough to stand at the church door of St. Patricks Barraniskey at sunset, you will see just why Co. Wicklow is called the Garden of Ireland.The Irish words "Barr an Uisce" (pronounced Bar on Ishka) literal English translation is "above the water". It is also the Irish name given to Barraniskey, which is a townland set in the heart of the beautiful County of Wicklow, on the East Coast of Ireland. The Irish word "Uisce" or "water" in English, was used during the time Irish monks first distilled what we now know as whiskey. The monks called it "Uisce Beatha" meaning water of life.Known as the Garden of Ireland, Wicklow represents all that is stunning in Irish countryside. With its fresh water streams, rolling hills, lush forests and majestic views, it offers all that is expected when we think of Ireland.he founder of "Barr an Uisce" Irish Whiskey, Ian Jones, comes from the small village of Redcross, which lies below the townland of Barraniskey. Redcross was a major stopping point for horse and carts travelling from southern Ireland to Dublin many years ago. People who travelled along the East Coast of Ireland found themselves in the village. Redcross became a meeting point for gossip, news, culture and music.Redcross and Barraniskey were both affected by the penal laws many years ago. In 1803 the Barraniskey church was built for people who moved from the village. The copper coloured Cross still stands in the graveyard in Redcross to this day.

The palate is chewy and mouth-filling with fresh oak and spice to the fore. Flavours of preserved apples and pears, wood shavings, ginger, vanilla, toasty