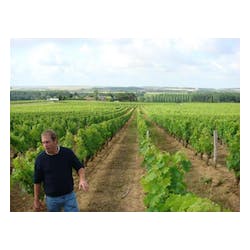 "Before the age of 30, Bertrand Sourdais had already made an impressive name for himself at Spain's Dominio de Atauta. In the process of revealing a new terroir from Atauta's ancient, ungrafted vines, Bertrand learned many invaluable lessons. The most important of these was the need to think critically about every single step in the viticulture and winery work. This process at Atauta also got Bertrand to start questioning the existing orthodoxies in his native Chinon. By 2003, Bertrand determined to return to France and take up the challenge of his beloved Cabernet Franc. His father's estate, Domaine de Pallus, is located in the heart of the appellation and is blessed with some of Chinon's choicest vineyards. With vines averaging over 35 years old, Pallus held all the potential Bertrand could hope for. Beginning with the 2003 harvest, Bertrand has begun his quest to find the ultimate limit for Pallus. As of 2010, Bertrand is converting the winery and his vineyards fully to biodynamic practices."

Wine Advocate 92 "The 2016 Chinon Les Pensées de Pallus is an impressive Cabernet that opens with an intense, very elegant and refined bouquet with minty

"Since the debut 2004 vintage, Les Pensées has grown in stature with each passing vinage. It is assembled from parcels on several different soil types,

Wine Spectator 91 "This has good depth, with a richness to the layers of damson plum, black cherry and red currant fruit, accented by notes of

Wine Spectator 92 "A very solid, muscular style, with a gutsy structure pumping along underneath the blackberry, black currant and roasted tobacco leaf notes. Broad and

Wine Spectator 91 "Concentrated, with black currant, fig and crushed cherry fruit, but also racy, as a mouthwatering iron note cut through this, backed by lively