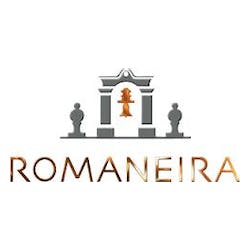 Romaneira has a very ancient history. Records exist of a vineyard here in the 17th and 18th centuries during which time the property successively belonged to the families of Sousa Guimaraes, whose initials appear on the gate of the Quinta with the date of 1854, Lacerda, Dona Clara de Lacerda having given her name to one of the two main quinta houses, and Monteiro de Barros, who enlarged the quinta to its present size in the 1940s. As one of the principal quintas of the Douro, Romaneira of course appears on Baron Forrester's map of the Douro, and is mentioned by the great Port wine authors of the 19th century, such as Henry Vizetelly. The Viscount de Vila Maior writes of Romaneira as "one of the best in the Douro, remarkable for body, mellowness and aroma". Single Quinta Ports from Romaneira were auctioned by Christies in 1872, the very first of its kind to be sold in this way. Remarkably, Vila Maior praises the character and personality of the wine of Romaneira due to the Touriga Nacional grape planted there. Today Touriga Nacional still represents the majority of the plantings at Romaneira (about 40%) and is a key element in our best wines, both for Vintage Port and for our top Douro red wines. A group of private investors, passionate about the Douro, acquired the property in 2004. The management was entrusted to the recognized team of Christian Seely and Antonio Agrellos, responsible since 1993 for the renaissance of that other great property in the Douro, Quinta do Noval. Seely and Agrellos have together been responsible for some of the greatest Vintage Ports to be produced in the Douro, and have also been pioneers in the production of unfortified red wines in the Douro. Christian Seely's long years of experience in the management of Chateau Pichon Baron and Petit Village in Bordeaux have contributed to the success of these Douro red wines. With Christian Seely as managing director and shareholder, and Antonio Agrellos as consultant oenologist, Romaneira has already since 2004 produced a series of excellent Vintage Ports (2004, 2005, 2007, 2008 and 2011). But the real revolution at Quinta da Romaneira manifested itself above all in the production of unfortified red wines of outstanding quality, as well as whites and Roses. The stimulus to the burgeoning Douro Revolution dates from 2004. The success of our wines on the National and International stage would not have been possible without the arduous work carried out in the improvement of the vineyard, undertaken with the objective of exploiting the potential of our terroir to its maximum. The old vines have been carefully tended and brought to the fullness of their potential. A large program of replantation of the vineyards throughout the property has also been undertaken, contributing in this way to the enlargement of the expression of the distinct microclimates and terroirs of the Quinta. Based on the research work "The History of Quinta da Romaneira" (by Prof. António Barros Cardoso, December 2015), and approved by the Port and Douro Wine Institute (the "IVDP") in February 2016, Romaneira is now updating its logo with the official foundation year. Romaneira, as we know it since the first half of the 20th century, is the result of several small and very old pre-phylloxera Estates, most of them classified with the designation of "Vinho de Feitoria" in 1757 (the highest quality at that time – with the capacity of being exported through the English "Feitoria", based at the city of Porto), during the first demarcations ordered by Marquis of Pombal. The abundance of Rosemary ("Rosmarinus Officinalis") at the Estate was probably the origin of its name. In reality, 1757 marks just the first record of the Estate, since the vineyard was surely planted a few decades before.In 2017 Romaneira will celebrate its 260th official anniversary.

Wine Advocate 94 The 2016 Vintage Port is mostly Touriga Nacional (70), with the rest comprised of Touriga Franca and Tinto Cao, aged for 20 months

Winery Notes "A blend of wines aged in old wooden and stainless steel casks during 2 to 3 years. It has a yellow golden colour and

This unfiltered Late Bottled Port was made from high quality grapes from Quinta da Romaneira. Trodden by foot and vinified in our lagares, as for

Wine Spectator 92 "This is inviting, with a core of dark plum, blackberry and blueberry reduction notes scored by cocoa and Black Forest accents. Shows a

Wine Advocate 93 "Romaneira does a fine job with this category. It is a go-to producer for fine LBVs. Its elegant 2012 is lovely, with expressive

Wine Advocate 95 "This has a very expressive nose with blackberry, liquorices, a touch of fruitcake and freshly tilled soil. Good definition. The palate has wonderful