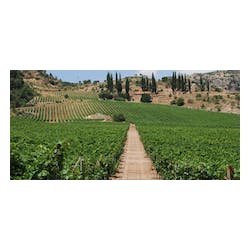 GAIA Wine Producing Company was founded in 1994 by Leon Karatsalos (Agronomist, University of Thessaloniki) and John Paraskevopoulos (University of Thessaloniki Doctor of Enology with the University of Bordeaux). In the same year, Thalassitis VQPRD was introduced into the Greek market, followed by Notios White in the following year. 1996 saw expansion for the firm as it acquired a private vineyard and a 1,500HL capacity winery in the Nemea region of Greece. In 1997, the limited production Notios Red was introduced into the market made from indigenous grapes.

A dry, white wine made of the local Assyrtiko grape. The Gai'a winery makes these wines from Santorini and is perhaps the only winery we

A dry, white wine made of the local Assyrtiko grape. The Gai'a winery makes these wines from Santorini and is perhaps the only winery we

Wine Advocate 90 "The 2016 Assyrtiko Wild Ferment was aged in a 50/50 blend of stainless steel and barriques. That "barrique aging" part is particularly complicated,

Wine Advocate 91 "The 2015 Assyrtiko Wild Ferment is Gai'a's alternative vision of Assyrtiko. About half the juice was aged in stainless steel. The rest was