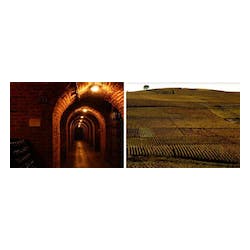 1829 : an adventurous aristocrat and two experts in wine.The story began with Athanase de Villermont, the youngest son of a noble family with a brilliant destiny. A great soldier who shone during the American War of Independence, he inherited an extensive estate from his family in the Aÿ area. He immediately foresaw the extraordinary potential of the wines of Champagne, but as an aristocrat he was forbidden to become involved in trade. He then met Joseph Bollinger, a widely travelled German who had left his country of birth to learn about the Champagne wine trade, and Paul Renaudin, a local man who was fascinated by the world of wine. The firm of Renaudin-Bollinger & Cie was founded on 6th February 1829. Joseph took care of sales and Paul of the cellar. Athanase had founded a champagne House that was to endure through the centuries.

Wine Spectator 93 "This is firm and tightly knit, with a backbone of steely acidity, showing a fine, creamy texture that imparts an overall sense of

Wine Spectator 93 "This is firm and tightly knit, with a backbone of steely acidity, showing a fine, creamy texture that imparts an overall sense of

Wine Spectator 97 "This goes from zero to 60 right out of the gate, with an intense spine of acidity driving tightly meshed flavors of crushed