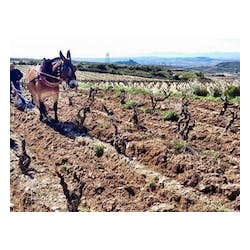 "Exopto is Latin for "to long for" or "to desire greatly" and it is the dream of Frenchman Tom Puyaubert and his family to endeavor to craft and assemble wines where the whole adds up to more than the sum of their parts. Tom relocated from France to Rioja in 2000 after falling in love with the region and working for the French cooperage Saury as its Spain representative. Rioja is a wine region that is a "tale of two worlds". There is the one world most known today comprised of wineries founded in the late 1800's (e.g. Lopez de Heredia, La Rioja Alta) with a winemaking model taught to them by the Bordelaise who came to Rioja after phyloxera decimated Bordeaux. This model often referred to as the "traditionalist school" is based on blending varieties from all over the appellation and long aging in cask with multiple rackings or trasiegos. Before this time period, however, there was another model for wine in Rioja and that is of the "vigneron" or grape grower and winemaker – one that was a small family farm centered on a specific village and terroir. For this style, the winemaking was natural and not focused on long aging in wood. In this model, the vineyards were often located in terroir, or soil-specific, areas suited to specific varietals and sometimes too extreme for other grapes or crops. When Tom began Exopto, he wanted to do a project that produced wines within this historical context of Rioja - combining both worlds in a unique way. His idea is to remain true to the blending of the principle grape varieties and to do so from the best terroirs/villages for those varieties crossing sub-regions of Rioja. Each wine though, has a majority of a different principle grape – showcasing that variety specifically within the context of a blend. The viticulture and winemaking model is that of the "vigneron" days – small plots of vines in the extremes, wild yeast fermentation in concrete or old oak vats and then aging in a way to showcase the fruit, minerality and terroir not the wood or aged flavors that people often associate with Rioja. The family owns and works a total of 16 hectares of vines in different terroir-specific sub-zones of Rioja with an age range from 30 to 90 years old. The vineyards are all worked naturally by hand and by horse for the top wine Exopto. They have 8 hectares in the village of Abalos above San Vicente in the foothills of the Sierra Cantabria with calcareous soils rich in limestone. In Abalos, Tempranillo shines and these small plots produce some fresh, concentrated, mineral rich and structured fruit. The remaining hectares are all in Rioja Baja at Monte Yerga and El Agudo with an altitude of 400-500 meters on poor sandy soils. Here they have very old vine Garnacha and Graciano. In this part of Rioja Baja you have the northern limit of the Mediterranean influence and therefore a great terroir to showcase Garnacha while being north enough and high enough to get a lot of freshness in this sometimes heavy and rich variety. This is also the location for their very old vines of Graciano where the vine age brings concentration and the altitude freshness and lift. The Garnacha focused wine is called Bozeto de Exopto which translated from Latin means "sketch" or "draft". As the name implies, it is their "beginning" wine. The blend is largely Garnacha (Yerga-Agudo) with Tempranillo (Abalos) and some Graciano (Yerga) all of which are naturally fermented and then aged for 6 months in concrete and 5,000L oak vats for 6 months before being bottled. The Graciano focused wine is simply called Exopto – the culmination of their efforts. The blend is largely Graciano (Yerga) with some Garnacha (Yerga-Agudo) and Tempranillo (Abalos). The grapes are destemmed by hand and fermented naturally in large oak vats and concrete. The wine then ages in French barrique 1/2 of which are new. The hallmark of these wines are their elegance, freshness and gentle concentration of fruit. The use of the blending concept showcasing one variety for each wine truly brings both of Rioja's worlds together and for sure adds up to more than the simple sum of the parts."

James Suckling 90 "A pretty nose of cassis, plums, raspberries, bark and sweet spices. Medium-bodied with sleek tannins. Round, plush and juicy with plenty of fruit

"The hallmark of Bodegas Exopto wines are their elegance, freshness, and gentle concentration of fruit. Their 'Horizonte' bottling is a blend of 80 percent Tempranillo,

James Suckling 92 "A creamy, full-bodied red with plum and berry character. Nice purity of fruit to this. Its full-bodied and layered with polish and beauty.

James Suckling 93 "Aromas of blackberries, blueberries, violets and lavender follow through to a medium to full body, with firm, linear tannins and a clean, bright

James Suckling 90 "The full, plum-cake nose and the supple and slightly sweet palate make this easy to drink, but there is some structure behind all

James Suckling 94 "This is a beautiful play between fresh blackberries, violets and lavender and dried meat, vanilla and spices. Iodine, licorice and tar all in

James Suckling 94 "Offers some riper fruits, in the prune and plum-paste zone, with a hint of black tea and some tarry flourishes. The palate has

James Suckling 91 "Very sweet maraschino cherry nose, but in spite of that this has healthy tannins and a nice acidity. If the alcohol didn't show

James Suckling 93 "Sweet black fruit and fine vanilla from the oak. Surprisingly plush for this category in spite of the serious tannins. Long and quite