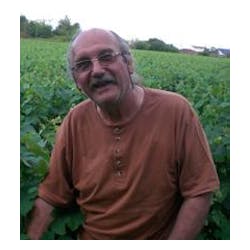 Michel Brégeon is part renegade, part crusader, and full-blown terroirist. Over the years, he has become an ardent defender of the Muscadet-Sèvre-et-Maine terroir, the most highly regarded of the four appellations in the Pays Nantais. Thanks to his deep understanding of the nuances of the land, he plays the game much differently than the region's caves cooperatives and negociants, who produce en masse and lose the subtlety of the appellation. For seven years, he worked for his family's domaine before setting out on his own in 1975. When his father retired in 1989, he gave his remaining vineyard land to Michel. Today, Michel farms seven hectares of vineyards in clay, silica, and gabbro soils. Gabbro is old, blue-green, volcanic rock, rarely found in vineyard land. Formed by magma eruptions under the ocean floor, it is said to impart intense complexity to Michel's wines. His corner of the Muscadet-Sèvre-et-Maine, Gorges, is particularly known for this rock, and all of Michel's vines are planted in it. His small community of vignerons is actively seeking recognition and preservation of this particular cru, called "Gorgeois."

Andre-Michel Bregeon is an icon of the Muscadet region and his Muscadet Sevre et Maine Sur Lie is nothing short of spectacular. This laser-like Muscadet

Though Muscadet has been commonly known to produce young, fresh wines, Michel has broken the mold, keeping some of his wines on the lees for

Though Muscadet has been commonly known to produce young, fresh wines, Michel has broken the mold, keeping some of his wines on the lees for

As tradiitrional as it gets for Muscadet from coastal Loire Valley. Great stony minerality and flavors of herbs and lemon peel with notes of salinity

" We’ve been fans of this classic Muscadet for years now and I am particularly enamored with this vintage. If you ever wanted to know

" We’ve been fans of this classic Muscadet for years now and I am particularly enamored with this vintage. If you ever wanted to

" Though Muscadet (made from the Melon de Bourgogne grape) has been commonly known to produce young, fresh wines, (even those that spend a few