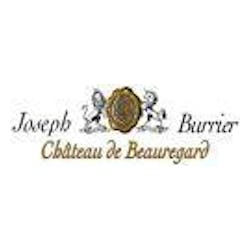 The Burriers have been a prominent winegrowing family in southern Burgundy since the 15th Century and have owned the Château de Beauregard in Pouilly-Fuissé for six generations. Frédéric-Marc Burrier is the current family member in charge of the château, as well as running a small négociant business under the name of his grandfather, Joseph Burrier. As the occasional president of the local winegrower's association, Frédéric has been one of the leading advocates for classifying the Pouilly-Fuissé region's best climats as premier crus. Frédéric has been focused on identifying the best single-vineyard sites since the mid-1990s and more than a dozen different Pouilly-Fuissés are produced today, along with wines from Mâcon, St-Véran, Fleurie, and Moulin-à-Vent.Location of VineyardThe Mâconnais takes its name from the city of Mâcon and sits between the regions of Côte Chalonnaise to the north and Beaujolais to the south. With its slightly warmer climate and limestone-rich clay, the Mâconnais is ideally suited to Chardonnay. The Burrier family owns 54 acres of Chardonnay in the Pouilly-Fuissé appellation split between the villages of Fuissé, Solutré-Pouilly, and Vergisson. The Château de Beauregard itself sits on a rolling plateau between Pouilly and Fuissé with the nearby single vineyards of Vers Cras, Les Vignes Blanches, La Maréchaude, and Vers Pouilly. They also own seven hectares of Chardonnay in Saint-Véran. In Beaujolais, they own 30 acres of Gamay in the crus of Fleurie, Moulin-à-Vent, Morgon, Saint-Amour, and Chiroubles.Winemaking PhilosophyChardonnay is pressed in a Vaslin mechanical press that Frédéric believes better extracts flavor and antioxidants from the skins. Slow fermentation occurs with native and sometimes cultured yeasts in 228-liter Burgundian pièce, temperature-controlled stainless-steel tanks, or a combination of both, depending on the appellation. Generally, Frédéric starts bottling after a minimum of one year of aging for Château de Beauregard Pouilly-Fuissé, and after 15 to 18 months for the climats of Vers Cras, Vignes Blanches, La Maréchaude, and Vers Pouilly. The cuvée, the "Grand Beauregard" Pouilly-Fuissé, is aged 30 months, first in barrel and then in vat. The whites are vinified and raised in Pouilly-Fuissé, and the reds at another facility in Fleurie.

Wine Spectator 92 "A whiff of oyster shell signals this sleek white, which gathers flavors of lemon, melon and mineral across the palate. The finish is