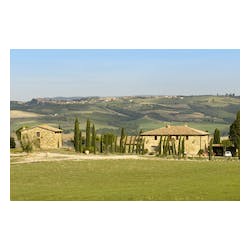 Casanova di Neri is the outcome of a process of productive and philosophical evolution, a new vision of Brunello di Montalcino that interprets tradition in a different innovative way. A profound commitment and respect for the land, a conviction that it is the lynchpin for the production of unique wines and that the care given in treating the grapes in the winery according to their varying characteristics is what we value most.OUR HISTORYFounded in 1971 by Giovanni Neri who with his great vision and passion understood the huge potential of wine in the Montalcino territory, it was passed on to his son Giacomo in 1991.Casanova di Neri does in fact stands for the Casanova Estate of the Neri Family..The production started in the Eastern part of Montalcino and was extended later in other areas.First came the Cerretalto vineyard, a unique terroir in a natural amphitheatre over the Asso river in which the old vines produced a Sangiovese different from the others, with small bunches of well distanced grapes, from which a selective variety was grown that was used in out other vineyards particularly in Tenuta Nuova.The acquisition of Cerretalto was followed by that of Le Cetine, Pietradonice and then Podernovo. All this by researching the best soil and exposures so as to produce unique and recognizable wines.The first Brunello harvest was 1978. This was followed by Cerretalto1981, Rosso di Montalcino 1982, Tenuta Nuova 1993, Pietradonice 2000, IrRosso di Casanova di Neri and the last one Ibbianco 2011. In the course of our small yet at the same time great history we have received awards from the most important reviews and opinion leaders of national and international wine critics.Currently the estate covers a surface of around 500 hectares of which 63 are vineyards, 20 olive groves and the rest arable land and forest.PHILOSOPHYWe believe that wines are the fruit of the vineyard and of man's labour.The care and passion in working the land has to take into account the characteristics of the land, the microclimate and the variety so as to produce a unique distinct wine able to express its territory. For over forty years our evolution has been marked by careful targeted choices that have distinguished our estate and the wines we produce creating their own style.A constant search for particular soils that exalt the quality and uniqueness of our wines and farming practices that respect the land and the vines are followed by attentive care in the making of the wine. Our wines are the fruit of exceptional combinations of soils and microclimates together with passionate and meticulous work enabling us to obtain constant results and to enhance the distinct features of the grapes throughout the different vintages.

Wine Advocate 94 "The Neri family has created a classic expression of Sangiovese from a classic vintage, while remaining faithful to the house style. In a

Wine Advocate 97+ "This is one of my sweetheart wines from Montalcino. The Casanova di Neri 2016 Brunello di Montalcino Tenuta Nuova offers a long list

Irrosso (or IrRosso) is Casanova di Neri's most recent creation. It is made primarily from relatively young Brunello (Sangiovese) grapes from the Fiesole vineyard which

Wine Advocate 92 This is the white label Brunello from Giacomo Neri and his son Giovanni. The 2014 Brunello di Montalcino is faithful to the vintage

"Our Rosso di Montalcino comes from our vineyards south of Montalcino in which the particular soil, microclimate together with the utmost care taken in the

James Suckling 98 "A vivid and bright red with intense blueberries and raspberries. Floral undertones and tons of citrus, too! Full-bodied, dense and layered. Polished tannins

Wine Advocate 93+ "It's that time of year: get your Neri on. This blockbuster Montalcino estate has released another fantastic collection of new wines, including the

Wine Spectator 98 "This intense version is concentrated, with black cherry, blackberry, graphite, tobacco and spice flavors, yet remains light-footed due to the racy profile. Structured,

"Ruby red with garnet reflections, hints of maraschino cherry, violets and red fruits. Great fineness in the mouth with tannin that is still young but

"Ruby red with garnet reflections, hints of maraschino cherry, violets and red fruits. Great fineness in the mouth with tannin that is still young but

Wine Advocate 92 "Giacomo Neri has produced a very approachable wine in this warm vintage. The 2011 Brunello di Montalcino is plump and juicy with loads

James Suckling 96 "Gorgeous aromas of sea salt, savory, smoked meats and dried fruits follow through to a full body, with fine tannins and a long

Wine Advocate 100 "The 2010 Brunello di Montalcino Tenuta Nuova is a protagonist of the vintage. The fruit is deep and dark with rich levels of

Wine Advocate 88-90 Barrel Tasting "I tasted the 2009 Rosso di Casanova di Neri from tank just before it was scheduled to be bottled. The wine

Wine Advocate 93 "The 2009 Brunello di Montalcino is an impressive and impeccable wine that delivers a slow and sensual progression on the palate. Along the

James Suckling 93 " From vineyards in the southern part of the appellation, the 2009 Brunello di Montalcino Tenuta Nuova does show some of the hallmarks

Wine Spectator 94 The sawdust and graphite aromas turn to cherry and raspberry flavors in this vibrant, complex red. A beam of sweet fruit imparts energy

Robert Parker 90 "The 2008 Rosso di Montalcino (labeled Rosso di Casanova di Neri for the US) is a beautiful, impeccably balanced wine. There is lovely