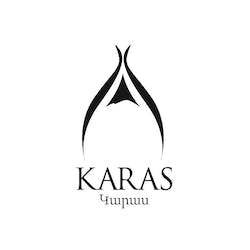 "Karas is a newly established winery in the West of Armavir Region. Located in the Ararat Valley, between Mount Aragats and Mount Ararat. Armavir is the smallest and the most densely populated region in Armenia. The convenient location and the favourable climate have allowed this thriving region to become the epicentre of agricultural development. Aside from its highly agricultural background, Armavir also holds a rich historical and cultural legacy, thus attracting thousands of natives and tourists each year to well-known sites, such as the Sardarapat Battle Memorial, the religious and spiritual centre of the Armenian Apostolic Church: the Holy City of Echmiadzin. In 2003 the pursuit for developing an inspiring project led us to discover these lands rich in minerals and suitable for high quality wine making. The innovation and technology were key factors in achieving our objective, and as from 2010, the production of Karas allowed us to have our first commercial production and so define a new way in the production of Armenian wines"

Wine & Spirits 88 "A bracing sparkler, this is filled with crunchy green-grape flavor and zippy acidity. It's a blend of chardonnay and colombard with ten

"Seated in the shadows of sacred Mount Ararat, Armavir and its venerable terroir made it a natural choice to begin the Karas story. History is rooted

The grapes are hand harvested and then pressed. After a cool 24 hour decantation process, the juice is fermented for 20 days at 14-16 degrees

“The blend has an intense red color. Elegant red fruits and berry aromas along with subtle vanilla and chocolate notes. Very elegant and velvety with

Wine Advocate 90 "The 2013 Karas Reserve Winemaker's Selection is a blend of 30% Syrah, 20% each of Tannat and Malbec, and 15% each of Montepulciano