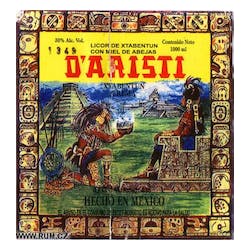 Xtabentún is an anise liqueur made in Mexico's Yucatán region from anise seed, and fermented honey produced by honey bees from the nectar of xtabentún flowers. Rum is then added to the anise and honey mixture. Because of the rum content, the xtabentún liqueur is sometimes called a "distilled honey" beverage, which is misleading, because the honey alcohol is fermented, not distilled. Distilleries still survive today in the Yucatán that produce the liqueur.

Xtabentun is a liqueur with a long history in the Yucatan, originating with the Mayan production of honey made from the Xtabentun flower. D'Aristi Xtabentun