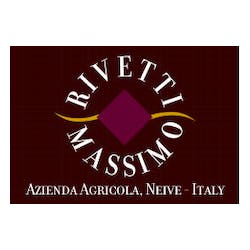 The Rivetti Massimo winery is situated in Neive, in Piedmont; its vineyards stretch on the sunny hills of the Lower Langa. The twenty hectares fully intended for the vine cultivation are divided into three different farmsteads: Froi, which is in the commune of Neive is the business centre and it is property of the family since 1947. It has always been intended for the wine viticultural production and with its wine-cellar and the twelve hectare vineyards it is one of the oldest structures in the area (which were already mentioned on the military maps at the end of the XIX century). The vineyards look favourably South, South-West, in fact they have two subzones called Rivetti and Serraboella, which are particularly important for the production of the Nebbiolo da Barbaresco; in addition to Nebbiolo also Barbera d'Alba, Moscato d'Asti and Cabernet Sauvignon are cultivated. Most of the vineyards are between thirty and fifty years old and they have a high density per hectare (4500 / 6500 vines). Garassino, which is situated in the commune of Mango, comprises four hectares looking South-West.For our farm it represents the possibility of future expansion of the plants; here, in fact, the vineyards are younger and there is the trend towards innovation of the Piedmontese sorts with the introduction of Merlot, Pinot Nero, besides to Langhe Nebbiolo and Langhe Arneis. La Palazzina, which is in the commune of Alba, comprises as well four hectares vines with traditional sorts such as: Nebbiolo d'Alba, Barbera d'Alba and Dolcetto d'Alba, with fully ripe (over 35 years), looking South vineyards.

Decanter 91 "Matured in cement and stainless steel, this Barbera is delightfully fresh and fragrant, with red and black cherry scents alongside some light herbs and

Fine fruit sweetness, balanced and velvety. On the palate it is sweet, aromatic and quite lively, combined with a background of flowers and yellow fruits. The

Wine Enthusiast 91 "Made with organically farmed grapes, this opens with aromas of rose petal, incense and leather. The structured palate offers red cherry, licorice and

Wine Spectator 92 "Cherry, spice, leather and earth flavors are the highlights of this firm, dense red. More up-front at this stage, yet balanced overall. Lingers