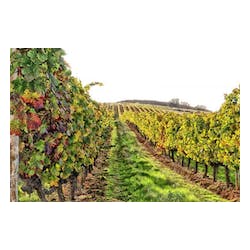 The story of the Guerra family and its boost to the wine industry in Bierzo has been mentioned by some historians, but with little details, apart from the notes of his distant cousin Raúl Guerra Garrido. The winery was founded in 1879, which is also when the first bottle of "Guerra" was released and that's why nowadays Vinos Guerra is one of the oldest wineries of Spain with one of the oldest Spanish brands. An impressive wide range of wines (not only still, but also sparkling) and spirits, Antonio Guerra managed to produce applying imported methods, such as the "champenoise". Antonio Guerra was a pharmacist and a real visionary, who was able to understand and value the potential of the vineyards of Bierzo, far before the appellations, the architectural & design wineries, the wine tours and the poetic back labels even existed. Applying revolutionary winemaking techniques and marketing, when the term wasn't probably even invented, Vinos Guerra showed the virtues of the wines from Bierzo to the world. Wines produced with old vineyards of Bierzo, along the Pilgrim Way to Santiago de Compostela, on sunny slopes that conceal Roman and Visigothic treasures. An emotional marketing always combined with the quality of the wide range produced by the winery. A good example is the wine club founded with creative ideas, design and guidelines that nowadays are still original and more up-to-date than ever.

Vinos Guerra, founded in 1879, is the oldest winery in the Bierzo region. The founder Don Antonio Guerra was a pioneer in many ways. Mr.

Founded in 1879, Vinos Guerra is the oldest winery in the Bierzo region and one of the most historic wineries in Spain. The founder Don