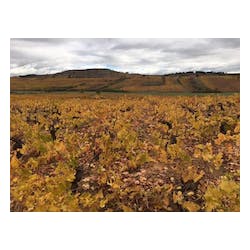 La Vizcaína is a relatively new project from Raúl Pérez that explores the hillside crus around his hometown of Vatuille de Abajo. Four reds and one white are produced under the name, all from vines with over fifty years of average age. Though all the red wines Raúl produces in the Bierzo D.O. are labelled as 100% Mencía, they all in fact contain significant quantities of other local grapes. The rich varietal diversity found in Galicia is due in large part to the famous Camino de Santiago, a pilgrimage to the tomb of Saint James in the town of Santiago de Compostela, the earliest references to which date back to the 9th century. The monks who made the journey would often carry vine cuttings from their home regions in their packs to offer as gifts to the Spanish monasteries that would put them up along the way. This is certainly the explanation for the preponderance of Trousseau found throughout northwestern Spain. Depending on the particular region (and often on the person you are talking to), the grape is known variously as Bastardo, María Ordoñez, Domingo Pérez, Merenzao, Godello Tinto and Verdejo Negro, but ampelographic studies have shown it to be genetically identical to the Trousseau found predominately in the Jura region of France. Other red grapes found scattered around the old vineyards of Bierzo include Sousón, Alicante Bouschet, Brancellao and Caiño. Curiously, Mencía and Alicante Bouschet are the only varieties approved by the D.O., hence the practice of simply labeling the wines as Mencía. Farming Practice:Practicing Organic

Wine Advocate 97 "This 2018 La Vizcana La Vitoriana includes vines that were replanted in 2014/2015 with Bastardo (Merenzao or Trousseau), so the wine is more

Wine Advocate 95 "La Gundiñas is the wine that shows the most differences between 2017 and 2018, when the 2018 La Vizcaína Las Gundiñas feels like

Wine Advocate 95 "I was impressed by the 2017 La Vizcana El Rapolao, but the warm vintage was very good for a warmer vineyard like El

Wine Advocate 95 "2018 is a great vintage: The cycle was long and Godello ripened properly, so they avoided the excess bitterness on the finish, as

Wine Advocate 93 "La Poulosa is quite regular and ripe, with notes of prunes, and even though there is more freshness in 2018, the 2018 La

Wine Advocate 96 "The vines at La Vitoriana are from a north-facing part of the vineyard and are extremely old, and the grapes show their best

Wine Advocate 93+ "I also got to taste the 2015 La Vizcaína la del Vivo, which came from a vineyard in the zone of La Poulosa

Wine Advocate 95 "My favorite red of the 2014 vintage was the 2014 La Vizcaína La Vitoriana, which was very expressive, floral and elegant, with filigree