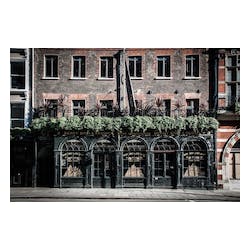 The King literally lived life in the fast lane. He would endlessly drive his horseless carriage (a Daimler), whatever the weather. So much so, that in 1903 the Royal Physician became concerned about the monarch's health. So, he called on Berry Bros. and Rudd for a solution, a high strength liqueur that would warm and revivify His Majesty. Crafted from ginger, (for centuries celebrated for its medicinal properties) The King's Ginger was born. Rich, golden and delightfully crisp in flavour, it helped King Edward stay colourful and ready for whatever came next.

"A high-strength liqueur created by the careful maceration of ginger root, enlivened by the addition of citrus in the form of lemon oil. Specifically formulated