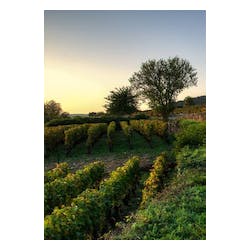 Jean-Paul Thévenet is the third generation to produce wine at his family estate in Morgon, but as a young man he took the domaine in an unexpected direction. In the early 1980s Beaujolais was flooded with mass-produced, over-commercialized wine, pushing winemaker and viticultural prophet Jules Chauvet to invoke a return to more traditional practices. Jean-Paul and three other local vignerons, Marcel Lapierre, Guy Breton, and Jean Foillard, soon took up the torch of this "natural wine" movement. Kermit dubbed this clan the Gang of Four, and the name has stuck ever since. These rebels called for a return to the old practices of viticulture and vinification: starting with old vines, never using synthetic herbicides or pesticides, harvesting late, rigorously sorting to remove all but the healthiest grapes, adding minimal doses of sulfur dioxide or none at all, and refusing both chaptalization and filtration. These techniques allow the character of Morgon to express itself naturally, without any cosmetic surgery: rustic and spicy yet also refreshing and loaded with the minerality of the granitic vineyards. Known as "Paul-Po" among friends, Jean-Paul is reserved yet fun-loving. He farms his small five-hectare domaine with his son, Charly, who also makes his own wine from the neighboring Grand Cru Régnié. Charly is a staunch advocate of natural wine just like his father, and since 2008 the two have taken the domaine to the next level by adopting organic and biodynamic viticultural practices. While the rest of the Gang works the Parisian market, hand-selling their wines, Jean-Paul maintains a low profile. Producing only 2,000 cases per year, he simply focuses on creating the best wines possible, and we are always eager to buy as many cases as he can spare!

Magnificent mastery of the region, with beautiful balance between spices and fruit. No heaviness on these Morgon old vines. Give it a little time to

Jean Paul Thévenet is one of the members of 'the gang of four' (Guy Breton, Jean Foillard, Marcel Lapierre), winemakers who pioneered the new winemaking

We are practicially giving away this wine. That's how I like to consider the wines of Thevenet. They are profound. Complex. Delicious. Age-worthy. Highly acclaimed