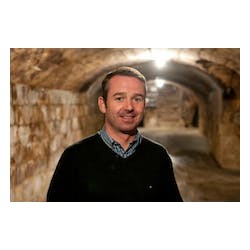 Rodolphe Péters took over the reins of this venerable estate in the southern Côte des Blancs in 2008, becoming the fourth generation to lead since the estate was founded in 1919, under the name Camille Péters. Today, Rodolphe holds 18 hectares of vineyards, predominantly in the grand cru of Les Mesnil-sur-Oger. Péters owns small holdings in several other grand crus (Oger, Avize and Cramant) but Les Mesnil-sur-Oger is where 45 of the 63 parcels he farms are located. "For more than forty years, a mere percentage point separated Le Mesnil from Grand Cru status, and it wasn't until 1985 that the promotion came, even though many saw the village as the best of them all. Those grapes which grow in a belt at a height of 160-220 meters provide the most elegant champagnes the world has tasted. The cru has a very Special Chardonnay clone which gives a penetrating bouquet even when the actual content in a cuvée is small. Mesnil's wines are often shy and acidic when young only to explode in a burst of colour and sensational pleasures. The always smiling and tremendously skillful François Péters controls 17.5 hectares, twelve of which lie in the very best parts of Le Mesnil. For several years grapes from the [80-year] old vines in Les Chétillons were included in the vintage wine, but nowadays they make a Cuvée Spéciale from grapes from this unique location. . . . The enthusiasm over this wine all over the world is huge--and that's before anyone has had a chance to taste a mature bottle. Mesnil's wines take a long time to mature, but champagne from Peters offers from the start an accessible fruitiness that resembles tangerine and a large portion of butterscotch and nut aromas. With age they become majestic and deep as a water well, full of coffee and walnut aromas and a fleeting vibrant exotic fruitiness. Pierre Péters is a hidden treasure of Champagne . . . and the prices are laughable considering the quality of the wines."-Richard Juhlin, 4000 Champagnes "These are sleek, racy champagnes, expressing a classic character of Côte des Blancs chardonnay. They are marked by their fine acidity and prominent minerality, yet while they are always brisk and chalky, they are rarely austere, with the possible exception of certain vintages of the Cuvée Spéciale. All of the wines go through malolactic, due to their naturally high acidities. "We have a lot of acidity and a lot of minerality in all our wines," says Rodolphe Péters. "We want to build the structure of our wines around both acidity and minerality, not acidity alone."-Peter Liem

The Wine Terroir of Chtillon is situated in the Grand Cru village of Les Mesnil sur Oger and enjoys an almost perfect aspect. Three parcels from

Wine Spectator 94 "A harmonious Champagne that dances across the palate, with a fine, lacy mousse carrying a delicate mesh of Gala apple, yellow plum, tangerine

Vinous Media 97 "The 2012 Blanc de Blancs Les Chétillons is fabulous. Rich and explosive in the glass, the 2012 has all of the intensity of

Wine & Spirits 95 "The first impression is that of a pure and elegant, soil-driven wine, white as the chalk in which it grew. The