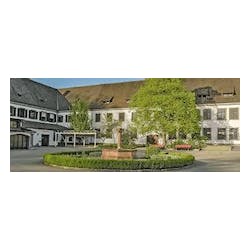 What's the best way to start a story that spans two centuries? Perhaps with the object that most clearly captures and puts the spirit of the story into words – and by "spirit" we mean both senses of the term. You see, the famous Schladerer bottle not only holds a spirit made from the best fruit, but also encapsulates the spirit of the family behind the popular fruit brandy specialties: the Schladerer family. The Schladerer bottle is a symbol of the passion – for unspoiled nature, choice fruits, solid craftsmanship and the highest quality – that the Schladerer family has poured into its fruit brandies from the very beginning. Our story begins in Bamlach am Oberrhein near Basel, which is where Sixtus Balthasar Schladerer was born in 1790. In 1813, he took up the craft of distilling fruit at his family home, laying the foundations for Schladerer's future success story. His son Sixtus moved to Staufen im Breisgau in 1844, married the daughter of the Kreuz Inn's innkeeper and went on to manage the establishment. Connected to the inn was a post house, which explains why the inn was later renamed the Kreuz-Post and why the Schladerer coat of arms still bears a post horn today. Sixtus inherited his father's passion for distilling fruit and was able to generate enthusiasm for his fruit brandies that extended far beyond his guests at the Kreuz-Post. Sixtus's son, Hermann Schladerer, took over the reputable inn in 1876, along with its farm, vineyards and distillery, and turned it into one of the most popular inns around, with many guests traveling specifically to stay there from neighboring Switzerland and Alsace. Hermann also perfected and refined the art of distilling fruit brandy, transforming his "Chriesiwässerli" (Kirsch) into a sought-after signature drink. However, it was the next generation of the family that would make the Schladerer name known the world over. Hermann's son, Alfred, took over his parents' business in 1919, devoting himself entirely to expanding the family distillery. A qualified restaurateur who had trained in France and England, and something of a marketing pioneer, he understood how to raise the profile of his creations, not least by designing the aforementioned square bottle.