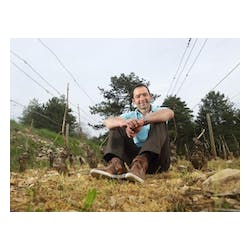 "Guillaume Camus of Domaine Camus-Bruchon is one of the most sure-handed red winemakers in the Côte de Beaune. Located in the village of Savigny-les-Beaune, just to the north of Beaune proper, the Camus' fashion beautifully balanced, deep and complex wines that are the epitome of what great Burgundy is all about. The family has a lovely spread of top vineyards in Savigny-les-Beaune (both superb premier crus and a handful of top village wine parcels planted with very old pinot noir vines), as well as a bit of premier cru in Beaune and Pommard as well. Today, Guillaume, the son, is offically at the helm at the domaine, though his father, Lucien, was very much involved until his passing in 2017. Like so many of the very best producers in Burgundy, it is very clear that the Camus spend the lion's share of their time out in the vineyards tending their vines. There are a notably high percentage of very old vines in the Camus-Bruchon portfolio, and from these venerable vines hail some of the very finest and classiest examples of Savigny-les-Beaune to be found in Burgundy that can easily hold their own with the handful of top domaines in the village. Savigny-les-Beaune is a happy hunting ground for red Burgundy lovers who appreciate value as well as quality in their reds. These are red Burgundies that drink well from a fairly early age, but also blossom beautifully with bottle age, and have no difficulties aging gracefully in the cellar for twenty-five to thirty years. The Camus' red wine lineup begins with a deep and serious example of Bourgogne rouge, which not surprisingly displays some of the spiciness on both the nose and palate for which the wines of Savigny-les-Beaune are so well known. There is also an excellent Chorey-les-Beaune that is fleshy and complex right out of the blocks, and has to be one of the great bargains in the world of red Burgundy. Amongst the Savigny-les-Beaunes, there are three village wine level bottlings: a straight and lovely Savigny AC called "Cuvee Reine Joly" (named after Guillaume's grandmother), and two very old-vine lieux-dits cuvées that are really of premier cru quality, "Pimentiers" and "Grands Liards". Both vineyards are between 80 and 100 years old, and offer great depth as well as the creamy sappiness of old vine fruit over great bases of soil and a fine underlying minerality. The premier cru Savignys in the Camus-Bruchon portfolio encompass some of the very greatest vineyards in the village, including a beautiful "Aux Gravains" bottling from fifty year-old vines (which may be one of the best-kept secrets in all of the Côte de Beaune), a beautiful "Les Lavières" (the most elegant and plummy of Savigny's premier crus), and an old vine bottling of "Narbantons", which is the deepest and most ageworthy of these great Savignys. The domaine also has one Beaune premier cru, from the vineyard of "Clos du Roi", which drinks a bit earlier than the top Savigny premier crus and is a classic example of the village, with lovely red fruit and spice. The Camus-Bruchon red wine lineup is rounded out by an excellent Pommard premier cru, from the vineyard of Les Arvelets, which is made from fifty year-old vines and is a very elegant, albeit powerful example. There is also one great value white wine in the cellars, a full-bodied and complex Savigny-les-Beaune Blanc, made from one hundred percent chardonnay and raised entirely in one year-old barrels. Across the board the Camus-Bruchon wines are precise, focused and reflective of their underlying terroir, with great sappiness and depth in the mid-palates, coupled with brilliant structural integrity and a lovely underlying minerality that makes them truly distinctive amongst the wines of the southern half of Burgundy. Camus pere et fils have always been meticulous and talented winemakers. In the cellar, they use no more than twenty-five percent new oak for any of their top wines. Starting in 2010, they began using some whole cluster fermentation (15-30%, depending on the vintage), which adds some additional complexity to the wines. Overall, there is a refined elegance and perfumed precision to the Camus-Bruchon wines that is very special, and is most impressive considering the rather youthfully "sauvage" elements that can sometimes be found in young Savignys and Pommard. Guillaume Camus is one of the unsung young stars of the Côte de Beaune. Yet because he is working in the village of Savigny-les-Beaune, rather than Vosne-Romanée or Gevrey-Chambertin, and at a somewhat under-the-radar winery, his brilliant wines also offer up extraordinary (and downright CRAZY) value in the world of Burgundy pricing."

"Giullaume Camus is one of the young stars of the Cte de Beaune, and because he is working in the village of Savigny-les-Beaune, rather than