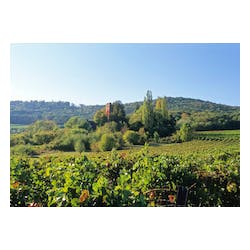 For many years now, the Becker estate located in Schweigen, very far south of the Pfalz on the border of Alsace, has been one of the top Pinot Noir producers in Germany. The best Becker Pinot Noirs compare favorably with the best Burgundy has to offer. In 1973 when Fritz Sr. took over the estate from his father, he stopped selling grapes to the local co-op and started bottling and selling his own wines. He was also one of the first that independently, but in parallel with Dr. Heger, Fürst and Meyer-Näkel, started using barriques for his Pinots. In the beginning he was very frustrated trying to successfully in his words "transferring the gift of nature into fine wine", as his colleagues in France had been doing for many years. In 2005 Fritz Jr. took over the winemaking at the estate and his father continued to oversee the outside vineyard work. In 2007, the Beckers started to work with lower must weights more in the range from 92-98 Öchsle rather than previously with 100 Öchsle or more. They learned that physiologically ripe fruit needs acid more than additional sugar. Almost 70% of their vineyards are located in Alsace. The fruit for their Grosses Gewächs Pinot Noirs comes from two great sites: the Kammerberg, a steep single vineyard near Wissembourg was recovered by Fritz Sr. in 1966. The old vines with mostly German clones and some French grow on deep marl lime soils that produce powerful but also refined, mineral driven Pinot Noirs (it is all about the dirt here!); the other Grand Cru is the St. Paul cultivated in the 14th century by the Cistercians of Wissembourg. The site had since become overgrown but the Beckers uprooted trees and bushes in early 2000 and planted a mix of Pinot clones from Dijon and the German Marienfelder clone. The first vintage was harvested in 2004 and even then the Pinots were very fruit driven (the Dijon clones) but with lots of finesse and refinement. St. Paul Pinots are released two years and the Kammerberg three years after the vintage. The Beckers also produce a Riesling Grosses Gewächs from the Sonnenberg with "poor" limestone soils that brings a surprisingly light and elegant wine. In addition a series of very good Pinot Blancs (a lot of limestone here!), a superb Gewürztraminer and an interesting red, "Guillaume" (a cuvee of Cabernet, Merlot, Dornfelder and Pinot Meunier). From the 28 ha the Beckers produce over 12,000 cases annually. Plantings are 60% Pinot Noir, Pinot Blanc, Pinot Gris, 22% Riesling, and the remaining 18% includes Silvaner, Gewürztraminer and Muskateller.