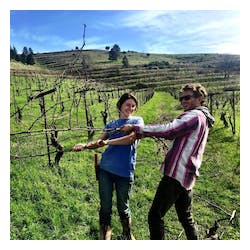 Aaron & Cara Mockrish ended up in North Yuba County with the intention of establishing a farm, but a bottle of Clos Saron Black Pearl 2008 sent them off on an unexpected path to winemaking. Having tasted the wine, they found that the man who made it lived near to their farm, and so they made it their mission to meet him. It was there, in Oregon House, California, that they found Gideon Beinstock, his tiny home vineyard, and their future. They began learning from Gideon, everything from working in the vineyards to the winery and everything in between, and it was clear that not only was this the life for them, that this place was a singular place and the wines were unlike anything else. They managed to make a connection with Renaissance Winery (where Gideon had made his earliest, incredible wines, as well as many of the first vintages of Clos Saron), which was no longer producing their own wine, and leased their oldest producing vines. This had three immediate effects. One: Frenchtown Farms was born. Two: Clos Saron regained access to this incredible vineyard. Three: Dani Rozman from La Onda has been able to work with this site and make wonderful wines. These three wineries represent something very special: the history and the future of this incredible terroir. Now only a few vintages in, we are observing the thrilling next phase of this long overlooked region.

A blend of 50% Syrah and 50% Grenache from North Yuba (the famed Renaissance Vineyard!) Rich plum fruit up front turns the wine full body

75% Syrah and 25% Sauvignon Blanc from the famed Renaissance Vineyard in Yuba County CA. Yuba is essentially where the Sierra Foothills meet the

100% Syrah that displays how insane this variety is when grown in the proper place and treated by the right hands. Dark and deep but

'Apogee' is 100% Méthode Champenoise Cabernet Sauvignon. The wine spends one year in barrel with an additional year on its lees, non-disgorged (it's under crown

This is just straight up delicious, fringe-y, Pet-Nat. No mouse, but it's certainly not Veuve Clicquot. Maybe the Veuve of North Yuba? It's really tasty

70 Cabernet Sauvignon, 25 Merlot and 5 Semillon. Full-bodied, and effortlessly elegant. Right from the get-go you'll find an abundance of floral notes,

Syrahs gamey, meaty side, with raspberry and plum fruit, plenty of structure and a grippy tannic finish 95 Syrah 5 Roussanne from Renaissance Vineyard in North

60% Syrah, 40% Sauvignon Blanc. 90% of the fruit is from 30 year old vines in Penn Valley called Suncrest vineyard. Decomposed granite with

“60% Sauvignon Blanc, 40% Viognier. The Viognier came from Bokish in Lodi, was stomped and sat on its skins for a few days. The Sauvignon

60% Merlot, 35% Cabernet Sauvignon and 5% Semillon. Renaissance Vineyard - North Yuba 20% of the Merlot from Colfax in the Sierra Foothills. 13.3% whole cluster

Syrah/Viognier Rosé "We picked the Syrah from our small vineyard in Penn Valley at 18.5 brix, stomped it, ate lunch, and then pressed it into puncheon

60% Carignan, 40% Zin From the oldest producing vines in California. Jessie’s Grove in Lodi, owned by the same family since the late 1800’s when

The fruit comes from David Polite who runs Carlton Hill Vineyards. It is one of the only eastern facing slopes that fully ripens Pinot in

85% Syrah 15% Roussanne Whole-cluster, foot-stomped, naturally co-Fermented from the Renaissance Vineyards in Oregon House, CA at 2300 foot elevation in the most wild and undeveloped