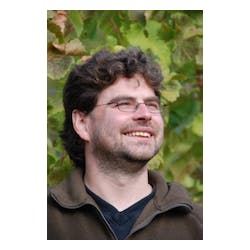 We are very excited to be working with Gernot Kollman, one of the most watched winemakers in Germany. After working at Van Volxem and then making the Knebel wines in 2008, Gernot had the opportunity (with partners) to purchase the historic estate of Immich-Batterieberg. The Immich family history in the Mosel dates back to the Middle Ages, when a Prince von Esch possessed the 12th-century building. Located in the center of Enkirch, the original section of the castle, Escheburg, is named after him. The Immich family would own the estate for over 500 years (1425–1989). In the mid-19th century, Carl August Immich needed more cultivable land on which to plant vines. His holdings included the Enrkirch hillside, which was less a hillside and more a steep cliff face of solid stone; using sprengbatterien (a battery of explosives filled with gunpowder) from 1841 to 1845, he reduced the site to rubble, which not only made it cultivable but also gave the vineyard its name, Batterieberg ("demolition hill"). The estate's name refers to this site.

A crisp, crunchy, keenly balanced, TOTALLY DRY Riesling from multiple sources along the Mosel, including the Saar, Mitelmosel and vineyards in Enkirch. The only Immich-Batterieberg

Wine Spectator 91 “Here is an effusive dry kabinett that offers plenty of mineral details along with tropical flavors of kumquat, passion fruit and tangerine zest,

Vinous Media 90 "To the already colorful array of sources for this largely tank-raised bottling from contract fruit – including significant contributions from Dhroner Hofberg, Kröv,