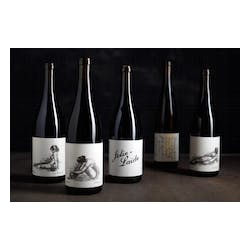 Jolie-Laide is a one-man operation based in a Sebastopol winery where winemaker Scott Schultz makes only 500 cases of wine a year under his own label. The name Jolie-Laide translates loosely to "Pretty-Ugly", a French term of endearment to describe something that is unconventionally beautiful. Scott makes some of the most unique and highly sought-after wines in California that are true to their name. Scott's passion for wine was ignited when moved to Napa from Chicago in 2007. Having had extensive experience in the restaurant business, he switched gears upon his arrival in California to lead the wine program at Thomas Keller's Bouchon. Working a harvest and as a cellar master are a few of Scott's many achievements. He now works with Wind Gap, Ryme Cellars, and formerly Arnot-Roberts. They all share both a winemaking space and similar philosophies in discovering unconventional beauty. Scott Schultz does what he loves, and he does it well. It shows!

Grown at high elevation in the beautiful red granitic soils of the Sierra Foothills. Picked in two separate passes, one early and one a bit

Winery Notes Hailing from the Historic old vineyard Glen Oaks Ranch which is now part of the Sonoma Land Trust. With its deep rocky alluvial soils,

Vinous Media 89-91 "The 2018 Melon de Bourgogne Rodnick Farms Vineyard is shaping up to be a real gem. Floral notes add perfume to a core

Vinous Media 90-92 "The 2018 Gamay Noir Barsotti & Witters Vineyard is bright, perfumed and full of energy. Red berry and floral notes perk up a

Grown at high elevation in the beautiful red grinitic soils of the Sierra Foothills. Picked in two separate passes, one early and one a bit

Back in the late 1960s/early 1970s, UC Davis sold what they thought were cuttings of Pinot Blanc to local winemakers. However, they were actually Melon

Vinous Media 89-91 “The 2017 Pinot Gris Rorick Heritage Vineyard is crisp, precise and nuanced. Three days on the skins draws out the pigment from the

Winery Notes “A veritable high wire act; light and pretty, wildly floral yet savory with a visceral depth. It may not fit into a conventional category,