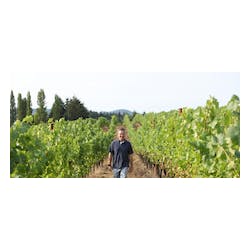 Ayres was founded in 2006 by Brad McLeroy. Brad grew up in Kanas City where his family owned and operated a wine shop. Brad felt the call to make wine, so moved his family to Oregon and honed his winemaking skills during his six year stint at Domaine Drouhin under the direction of Veronique Drouhin. It is here where Brad learned to craft beautiful, pure Pinot Noir that speaks of its place. The Ayres estate vineyards are all situated on gently eastern sloping hills of the Ribbon Ridge AVA on Willakenzie soils, surrounded by some well-known neighbors including Brick House, Beaux Freres and Patricia Green. Brad originally purchased his property in 2000 with an eye on developing his winery down the road. It consists consists of 40 acres, of which 20 are planted to vines. Brad is strongly committed to providing the vines, and his family who lives on the property, a healthy, chemical free environment in which to grow. No herbicides or pesticides have ever been used on the Ayres property, and he uses cover crops to help to prevent erosion. There's a belief at Ayres that the wines are the voice of the soils. It's about reciprocity, a relationship that begins in the vineyards and is translated into the wines. The McLeroy's have the luxury of growing the majority of their grapes, making the wines on site and living in the company of the vines. They purchase some grapes for their Gamay as well as a portion of their basic Willamette Pinot Noir and their Perspective Ribbon Ridge bottling. The wines at Ayres are comprised primarily of Pinot Noirs crafted from a mix of Dijon and Pommard clones. From the entry level Willamette Valley to the single vineyards, the Pinots from Ayres are textured and have clarity of fruit with a balancing freshness and minimal new wood influence. He likes to also use a little bit of whole clusters (5-10%) as well for added complexity and texture. In addition, Brad has become very fond of Gamay and is making a bright, crunchy version that will grow in production. Small amounts of Pinot Blanc and Rose are also produced.

"(Organic) Ayres was founded in 2006 by Brad McLeroy, and today he is producing some of the finest Pinot Noir values in all of Willamette

Wine Enthusiast 92 "(EDITORS' CHOICE) It's hard to imagine a better Oregon Gamay, a variety attracting growing interest among many of the state's wineries. Loaded with

Vinous Media 90 "Limpid violet. Spice-accented dark berry, potpourri and licorice scents, along with a subtle earthy nuance that builds in the glass. Seamless and open-knit,