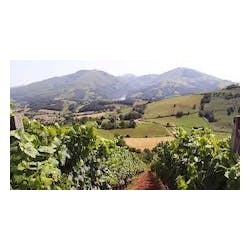 The Basque country lies along the southwestern border of France and Spain, deep in the dramatic Pyrénées mountains. The eleventh century monks of Roncevaux made wine to cater to a population of tourists--religious pilgrims traveling through the mountain pass from France on their way to Santiago de Compostella in Spain. However, throughout the centuries, wine production dissipated drastically. Although Irouléguy was awarded its own A.O.C. in 1970, by the late twentieth century, most of the remaining vignerons were selling to the local cooperative. And then along came Michel and Thérèse Riouspeyrous... Just after losing his father at the age of thirteen, Michel was raised by his grandfather, with whom he worked in the family farm and vineyards. He eventually gravitated towards studies in Agronomy before the mandatory service militaire sent him to Africa for duty. While in Africa, Michel met Thérèse, an Alsatian who was on vacation. They married and returned to Michel's home in the Southwest in the early eighties. In 1989, they decided to start their own domaine by renting two hectares of vineyards. The decision to farm organically came rather instantaneously to Michel. Once certified as organic, he and Thérèse pushed on towards the next logical progression: biodynamics. Juxtaposed against a backdrop of co-op wine that has come to categorize the appellation in recent decades, the Riouspeyrous seem even more radical--not only for bottling their own wine, but also for farming it as they do. For Michel and Thérèse, it just translates into a more authentic expression of the grape. A mere glimpse of their steep, terraced land, amid beautifully lush wildflowers, set against the white peaks of the Pyrénées, with sheep grazing on the soft, aerated soils in between vineyard rows, makes it easy to see what inspired such a decision. The majority of their eight hectares are planted to the native grape varietals, Tannat (red), Gros Manseng and Petit Manseng (whites). The sandstone soils of Irouléguy are ideal for these grapes because they are streaked with iron oxide, mica, silica, limestone, clay, and dolomite. The mineral diversity lends an intensity to the wines, making them wild, earthy, tannic, and rich in spicy aromas. Full southern exposure allows the Riouspeyrous to achieve ripeness in these cooler climate vineyards. They vinify each terroir individually through traditional vinification methods to bottle four delicious cuvées. Their rosé is what Dixon Brooke calls, "a winter rosé"--deep in color, generous in fruit, with unusually pronounced tannins, it is the perfect accompaniment to grilled sausages.

The Basque country lies along the southwestern border of France and Spain, deep in the dramatic Pyrénées mountains. The eleventh century monks of Roncevaux made

Organic/Biodynamic blend of 66% Tannat, 17% Cabernet Franc and 17% Cabernet Sauvignon. All grapes are harvested by hand and sorted in the vineyard and in

Michel and Thérèse Riouspeyrous craft some of the most exciting, singular wines in France—wines that tell a story about a land and a people. Basque

The Arretxea estate is located in the commune of Irouléguy. Spearheading the appellation, produces wines very distant from the image we may have of the