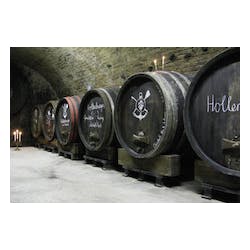 Christoph Hoch is a new, young Austrian winemaker in the Kremstal. He started out in 2009 at his parent's winery, making wine in a traditional style and he got bored. The schedule was too set for him. So, he started experimenting in 2010 and split from his parent's weingut in 2013. He has 5 hectares from his family spread throughout four different vineyards, all in the town of Hollenburg. Hollenburg is on the south side of the Danube, and like the other areas of the Kremstal, the subsoil is conglomerate. Conglomerate was formed by the Traisental and Danube river crashing together and compacting chalk and river stones together. The chalk comes from the Alps and it was brought by the Traisental River. It kind of looks like a construction mortar that you would make a building with. Christoph compared it to the chalk in the Côte des Blancs in Champagne and equally active, bringing minerals to the vines. Throughout all of Hoch's vineyards, you find a mix of mustard, rye, and phacelia. He considers all of his parcels by four categories: dry, chalky, nutrient rich, or holds water. Depending on the category, he will plant the herbs and grains accordingly. Mustard brings sulfur to the soil, which protects the plants and transfers it naturally to the wines, so that he can use as little as possible at bottling. Rye brings carbon to the soil. He knocks it down after it has grown and it creates a natural humus. The carbon from the rye works with the phacelia and creates nitrogen. As of 2015, the wines are certified organic and biodynamic. And interestingly, the local wine school in Krems sends students to Hoch to learn about biodynamic farming.

Christoph Hoch has very active, chalky soil much like what is found in the Cote des Blancs in Champagne. Upon learning this, he wanted to

Wonderfully expressive -- you'll find newborn roses, candied cherry blossoms, orange zest, pine shavings and more that pour out from the nose. Not to