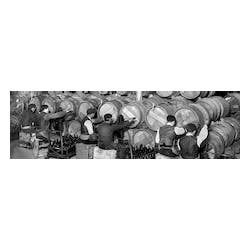 BODEGAS FRANCO-ESPAÑOLAS was founded in 1890 thanks to the golden age that Rioja experienced in the 19th Century, when the French, whose vineyards were agonising under the attack of the phylloxera plague, came to the region in search of replacement vineyards. This marked the beginning of the development of "fine Rioja wines." All this led to the founding of "Bodegas Franco-Españolas" in 1890 by Fréderic Anglade Saurat, of the Bordeaux firm Anglade, along with some Spanish partners, a merger between France and Spain, which translates into English as "French-Spanish Wineries". With its exceptional location on the banks of the Ebro River, the winery has borne witness to the history of Logroño. Over its 125-year history, it has received many distinguished visitors, such as Hemingway and King Alfonso XIII. Under the ownership of the Eguizábal Family since 1983, the winery is currently engaged in many new projects and has established itself as a leader in the field of wine tourism with a range of events and cultural activities.

Wine & Spirits 91 "This wine managed to transform the heat of 2011 into an elegant, high-toned Rioja, sanguine and salty with tart red berry and