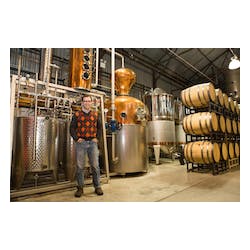 The earliest distilleries in Brooklyn date back to the 1700's. During Prohibition there were over 50,000 illicit stills in New York City. Since Prohibition however, the ethereal perfumes of distillation have been largely absent...until now.The New York Distilling Company builds on this dream by establishing one of the nation's premiere craft distilleries.

" An American gin named after Matthew Calbraith Perry, Commandant of the Brooklyn Navy Yard in the 1840s. Perry's Tot is bottled at the original