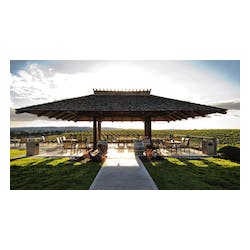 GARY & MARCY EBERLEGary Eberle grew up in Moon Township, Pennsylvania and was an all-star football player in high school. He was awarded a full ride scholarship to play football at Penn State in 1962. He earned a Bachelor of Science in biology, then attended Louisiana State University (LSU) for graduate work in cellular genetics. His success earned him a National Fellowship to Charity Hospital in New Orleans, where a professor introduced him to Bordeaux wine; one year later, Gary headed to U.C. Davis to study enology. Gary received a degree in Enology in 1971 and headed south to Paso Robles in 1973. First, he helped establish his family's Estrella River Winery & Vineyards, then he acquired 64 acres of his own down the road. Gary released his first Eberle wine, the 1979 Cabernet Sauvignon debuting the iconic boar logo, depicting the German origin of the name Eberle, meaning "small boar. Since then, he has earned recognition for many firsts including recognition for co-founding the Paso Robles Appellation in 1983, the first to use Paso Robles appellation on his wine label, the first to produce a 100% Syrah commercially, amongst many more. Gary has also earned awards of the years including the 2015 Wine Industry Lifetime Achievement award and most recently was honored with being named the 2019 Robert Mondavi Hospitality Award.