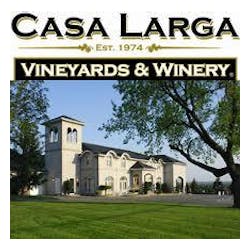 The Winery BeginsIn 1974, Mr. C planted the first two acres of vines atop a picturesque hill in Fairport, New York, naming it "Casa Larga," after his grandparents' vineyards in Italy. Mr. C working in the vineyardA piece of Italy in the heart of Monroe County, Casa Larga embodied Mr. C's dream - serving as a symbol of his dedication to the preservation of his Italian heritage. Passion, patience and tenderness were his gifts to the vines and the wines they produced. It takes about four years for vines to mature enough to produce good wine-quality fruit. The first harvest came in 1978, producing Casa Larga's first vintage, along with three awards at the New York State Wine Competition. Estate White (currently Pallido) and Estate Red (currently Tramonto) were two of the first wines produced. They earned silver and gold medals in the first competition in which they were entered Mr. C's hobby matured into a larger business, and Casa Larga became the 21st licensed winery in New York State. Casa Larga had now entered the golden era of New York State winemaking, becoming an icon, as well as a sparkling jewel of the Finger Lakes and Rochester regions.

Casa larga white sangria is a sweet and fruity wine with flavors of peach and pineapple. Served chilled on its own or over ice with