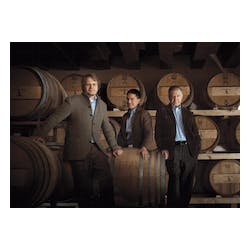 Official documents from as early as the mid-1500s attest to the Bertani family heritage in the Valpolicella region. At the start of the last half of the 1800s, brothers Gaetano & Giovanni Battista Bertani set out to establish a new benchmark for excellence in their craft. Combining their deep respect for tradition and love of the land with commercial savvy and innovative drive in both the areas of production and cultivation, the brothers Bertani built an enterprise unique to the Veneto of their epoch. With a forward-looking spirit, they introduced revolutionary vine growing techniques developed by agronomist Jules Guyot, techniques to which Gaetano Bertani had been exposed during his years of political exile in France for his active role in the Italian Unification Movement against the Austrian Empire. The brothers Bertani became the first in the region to bottle and sell Veronese wines, such as Valpolicella Ripasso, Recioto and Soave on a larger scale. They steadily expanded their market to Great Britain, Germany and the United States, winning recognition through winemaking competitions, both national and international. Today, Gaetano Bertani, great-grandson of founding brother Gaetano, and his sons, Giovanni and Guglielmo, maintain the family tradition and philosophy. Now in its sixth generation, the Bertani enterprise continues in the tradition of one of the oldest winemaking families in Italy, with a firmly-established history of excellence and the expertise born of a tireless endeavor to blend passion and skill with the power of the past.

James Suckling 93 " A fresh, fruity wine on the nose with plum and violet aromas that follow through to a medium body, firm, silky tannins

The Wine 75% Corvina, 10% Rondinella and 15% Corvinone grapes, harvested from the Villa Mosconi estate in Arbizzano di Negrar. Fruit is crushed, cold-pressed and

James Suckling 92 “This shows aromas of dark berries, earth and mushrooms. Medium body, round and polished tannins and a lively finish. Delicious now. Why wait?” The