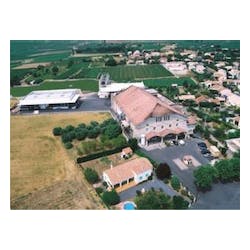 Founded in 1932, this Cave Coopérative is located in the top commune of Pomérols, located between the garrigue of Pezenas and the sea dominated by the Mont St Clair in Sete, Coteaux de Languedoc. The Caves de Pomérols cooperative, reiterates this wine's status as one of the GREAT VALUES of the World. Made from white picpoul grapes -- also known as folle blanche -- and seeing only stainless steel in its production. The soil in this seaside area of Languedoc, just west of the great lagoon of the Bassin de Thau, where the French coast starts its long curve downward toward Spain, is composed of clay and pebbles and fragments of limestone and fossil shells over marl, a perfect mixture for the grape's dry delicacy, lightness and stony, sun-drenched nature.

"Known as "the Muscadet of the South" in France, this is to the Mediterranean coast of France what Albariño is to northwest Spain...the default wine

Wine Advocate 89 "A delicious Picpoul that just scream for a hot summer say (or a plate of oysters), the 2015 Picpoul de Pinet H.B. offers

Wine Advocate 88 "The 2016 Picpoul de Pinet Hugues Beaulieu is about as quaffable and easy drinking as they come, showing lots of citrus and melon