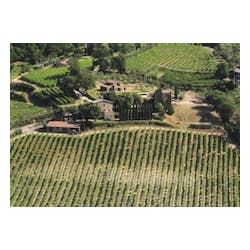 Fattoria La Gerla, named for the large, old-fashioned, conical baskets that grape-harvesters used to carry on their backs, was founded in 1976 by the late Sergio Rossi. Originally from Milan, Mr. Rossi purchased the property in 1975 from Tedina Biondi-Santi, the daughter of Tancredi Biondi-Santi, who had inherited the property after her father's passing. The purchase of what was then called the Podere Colombaio Santi included an ancient farmhouse and 6.5 hectare of vineyards. Mr. Rossi, who by then had been managing the Altesino-Caparzo estate for several years, renamed the property La Gerla and set about restoring the estate and replanting the vines using selection massale. His first vintage was 1976, making La Gerla one of the first 35 bottlers of Brunello di Montalcino; these days, there are 280. Today, La Gerla consists of 11.5 hectares, divided between the original 6.5 hectare vineyard in Canalicchio (Montalcino) and an additional 5 hectares in Castelnuovo dell'Abate, where Mr. Rossi was presciently the first to plant vines in earnest. The estate, now run by vineyard manager/director Alberto Passeri and winemaker Vittorio Fiore, makes five wines, all made entirely from Sangiovese Grosso, the only grape planted on the property:

The Wine Advocate 95 "Now we're talking. I tasted the 2015 Brunello di Montalcino after tasting the other samples from La Gerla, and it's amazing

Wine Advocate 94 "The 2013 Brunello di Montalcino is elegant, balanced and bright. The pretty luminosity of the wine's appearance helps to underline this positive impression.

This vineyard is in Castelnuovo dell'Abate in the southern part of the appellation. The vines are 15 years old, so La Gerla prefers to make