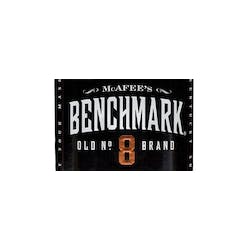 Buffalo Trace makes a lot of different bourbons but they only have a few mash bills. Age and placement in the warehouses determine the rest. Their #1 mash bill is a low-rye bill (less than 10%) and makes some big names: Eagle Rare, George T. Stagg and Stagg Jr., Colonel E.H. Taylor, the eponymous Buffalo Trace, Old Charter and McAfee's Benchmark. Benchmark Old No. 8 bourbon was created by Seagram's in the late 1960s as a luxury brand and was originally named Benchmark Bourbon. It was produced at the Four Roses distillery when Seagram's owned it. The brand name was purchased by Sazerac in 1992 and McAfee's was added to the name in honor of the McAfee brothers who surveyed a site just north of Frankfort in the late 1700s.

Medium amber in color, the nose bears caramel notes and a delicate stone-fruit backdrop. The body is medium, and the palate is robust and sturdy,

" Named after the McAfee brothers who surveyed a site just north of Frankfort in the late 1700s, this rye recipe bourbon is yet another