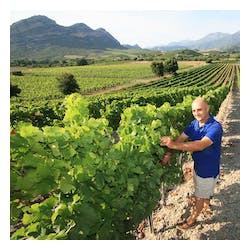 Yves Leccia has a certain presence and noble bearing to him, much like his wines. In France they have often been referred to as the "Rolls-Royce" of Corsican wines, a reputation earned after nearly 30 years of making consistently elegant and sophisticated wines. Raised in a small village in the heart of Patrimonio, Yves worked alongside his father in the vines and cellar at the earliest age he could. The Leccias have been making wine from some of the finest terroirs of Patrimonio for countless generations, and there was never the least doubt in Yves' mind that he would continue the tradition. Originally working alongside his sister, he decided to branch off on his own in 2004 and focus on the single terroir he felt was the top in Patrimonio. This terroir, "E Croce," sits on a thin chalk soil above a thick bedrock of pure schist, facing the gulf of St. Florent. Yves is a firm believer in the idea that if you want something done right you need to do it yourself, and thus he tends to his vines alone and works the cellar by himself as well. He keeps his yields low, knows when to harvest, and knows how to let E Croce express itself in the wines. Not a single bottle comes out of the domaine that isn't meticulously looked after from start to finish. In Corsica, Yves is celebrated not only for his wines, but also for being a founding member of A Filetta, a legendary and proudly nationalistic Corsican polyphonic singing group. Spend some time with Yves and you won't hear him boast or even talk much about his accomplishments. His name, Leccia, is Corsican for Oak. The name is ironic if you look at Yves' wines, given that he's never had his wine touch a single oak barrel and has never allowed wood to enter his cellar. The name is less ironic if you look at Yves himself, with his stoic manner and understated personality. Kermit touts the aging capacity of Yves' reds. He opened a 1998 in 2010 that he still talks about, comparing it to the best the south of France has to offer.

If youve asked me for a ros recommendation in the last few years, Ive probably directed you to our Corsican wine section. Not only are

Patrimonio is ordinarily the source of Corsicas darkest, brawniest reds, but 2018, a rainy year, produced much gentler wines than is typical from the Niellucciu

90% Niellucciu and 10% Grenache. Deep fruit flavored aromas that are spicy and intricate with underlying licorice. Tannic elements are apparent but tend to merge

Yves Leccia has a certain presence and noble bearing to him, much like his wines. In France they have often been referred to as the

The Niellucciu grape was long thought to be indigenous to Corsica, but recent DNA studies have shown a close genetic link to Tuscany’s Sangiovese. It