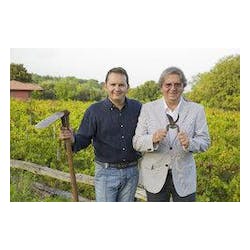 Terra Costantino is a family owned boutique winery in the region of Mount Etna, Sicily. The winery was founded in 1978 by Dino Costantino when he purchased 3 hectares to make wine and sell it off. In 2002 the winery progressed in obtaining their organic certification and adding Dino's son Fabio to the wine team. Terra Costantino completed a renovation of their winery becoming Sicily's first bio-architectural, a holistic approach to the environments surrounding while being energy and water efficient. Terra Costantino currently farms 10 hectares of pre-phylloxera vines in a single plot on the slopes of Contrado Blandano with an annual production of 40,000 bottles. The winery has five wines in their range; two whites, two red and one rosato. Luca D'Attoma has been the consulting oenologist providing advice and counsel since 2010.

James Suckling 93 Certified Organic 90 Nerello Mascalese and 10 Nerello Capuccio Perfumed aromas of strawberries, flowers and cherries follow through to a medium to full